The Ladybug, has a fascinating history. There are about 500 species in the United States, and 6,000 different species around the world. 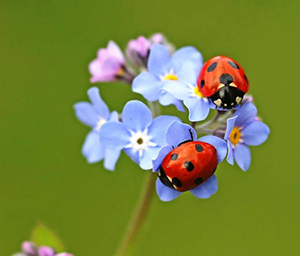 How it got its name: In Europe, during the Middle Ages, swarms of insects were destroying the crops. The farmers prayed to the Virgin Mary for help. Soon thereafter, the Ladybugs came, devouring the plant-destroying pests and saving the crops!

The farmers called these beautiful insects "The Beetles of Our Lady", and eventually they became popularly known as "Lady Beetles".  Ladybugs go by a few different names, including: Ladybirds, Ladybugs, Lady beetles and Lady cows. 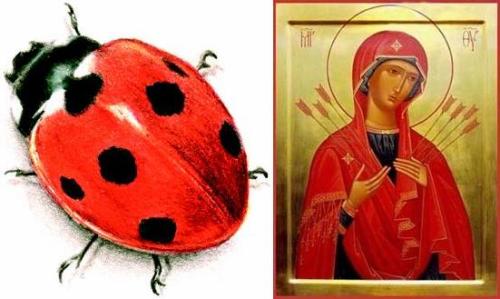 The red wings were said to represent the Virgin's cloak ,and the black spots were symbolic of her seven joys and seven sorrows.

"Ladybug, ladybug fly away home,
Your house in on fire and your children are gone"
Also in Medieval England, the farmers would set torches to the old Hop vines after the harvest, to clear the fields for the next planting. The poem was a warning to the aphid-eating Ladybugs, still crawling on the vines in search of aphids.

All ladybugs are less than ¼ inch long, oval or round shaped, and have six short 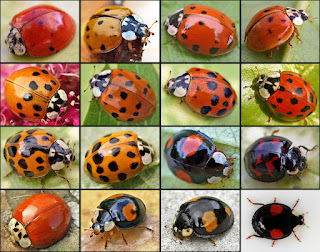 legs. ... Sometimes, the ladybug will be a solid color with no pattern at all, and can be yellow, brown, or black. These colors and patterns are thought to warn predators of the ladybug’s bad taste and poison.
They can have as many as 16 spots, and some ladybugs have no spots at all. Both male and female Ladybugs have spots, and can eat up to 50 aphids a day!

In the 1880's, California, a destructive scale insect was killing large groves of lemon and orange groves. The orchard owners released thousands of Australian Ladybugs with the hopes that they would gain the upper hand. Within 2 years the scale insect infestation was conquered and the trees began to bear fruit again.  The Ladybugs had singlehandedly saved an entire industry (worth half a billion dollars today). 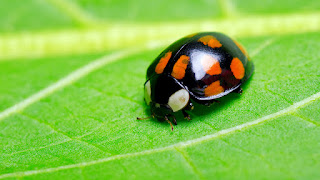 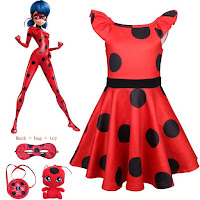 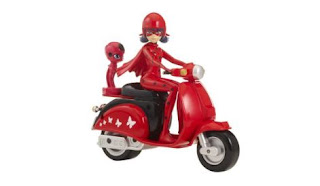 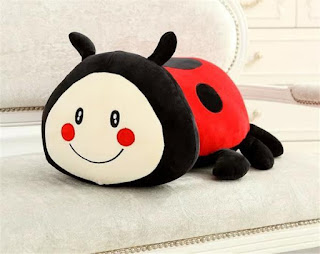 LADYBUG LEGENDS:
Nearly ALL cultures believe that a Ladybug is lucky. Killing one is said to bring sadness and misfortune.

In France, if a Ladybug landed on you, whatever ailment you had would fly away with the Ladybug. 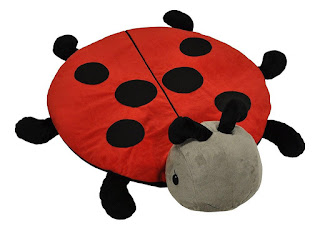 In Belgium, people believed that if a Ladybug crawled across a young girl's hand, she would be married within a year.

People in Switzerland told their young children
that they were brought to them, as babies, by Ladybugs. (...and we thought Storks did that)!

In some Asian cultures, it is believed that the 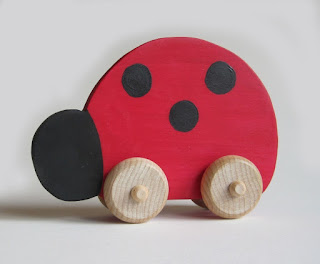 Ladybug understands human language, and has been blessed by God, Himself.


According to a Norse legend, the Ladybug came to earth riding on a bolt of lightning.

The Victorians in Britain believed that if a Ladybug alighted on your hand, you would be receiving new gloves.....if it landed on your head,
a new hat would be in your future, and so on.

In the 1800's, some doctors used Ladybugs to treat measles!  They also believed that if you mashed ladybugs (ewww!) and put them into a cavity, the insects would stop a toothache!

During the Pioneer days, if a family found a Ladybug in their log cabin during the winter, it was considered a "Good Omen".

In Norway, if a man and a woman spot a Ladybug at the same time, there will be a romance between them.

Posted by GiniRifkin at 2:28 PM