THE ORIGIN OF THE COMPASS ROSE 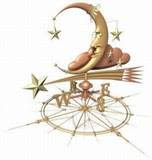 The compass rose has appeared on maps since the 1300's when the portolan charts first made their appearance. These were charts frequently drawn on sheepskin which showed coastal features and ports. In earlier days, what could be used as a harbour encompassed more of the coastline than now. As ships were smaller back then they might need to seek refuge more often and some ships were intentionally beached for maintenance and repairs. Thus, nearly any protected bay or flat beach might be of interest to mariners, for safe harbour but also as coastal reconnaissance.

The straight lines criss-crossing many portolan charts represent the thirty-two directions (or headings) of the mariner's compass from a given point. This is similar to the compass rose displayed on later maps and charts. Unfortunately, portolan charts failed to take into account the curvature of the earth. Therefore, they were not helpful navigational tools in crossing the open ocean. But they were of use in close quarter identification of landmarks and were used for navigation in smaller bodies of water, such as the , Black, or .
The term "rose" in compass rose is derived from the figure's compass points resembling the petals of the well-known flower. Originally, this device was used to indicate the directions of the winds (and it was then known as a wind rose), but the 32 points of the compass rose come from the directions of the eight major winds, the eight half-winds and the sixteen quarter-winds. 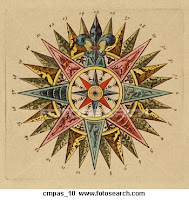 In the Middle Ages, the names of the winds were commonly known throughout the Mediterranean countries as Tramontana (N), Greco (NE), Levante (E), Siroco (SE), Otro (S), Libeccio (SW), Ponente (W), Maestro (NW).
On portolan charts you can see the initials of these winds labeled around the edge as T, G, L, S, O, L, P, and M. The 32 points are therefore simple bisections of the directions of the four winds.

For western apprentice seamen, one of the first things they had to know were the names of the points. Naming them all off perfectly was known as "boxing the compass".
There is no absolute standard for drafting a compass rose, and each school of cartographers seems to have developed their own style. In the earliest charts, north is indicated by a spearhead above the letter T for tramontana. (Tramontana or Tramontane can refer to Tramontane, a northern wind). 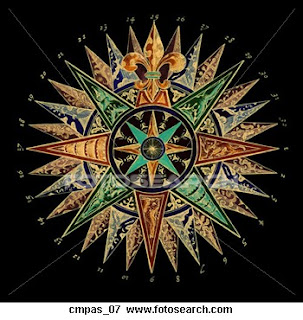 This symbol evolved into a fleur-de-lys around the time of and was first seen on Portuguese maps. Also in the 14th century, the L was found representing levante.  (Viento de Levante is  an easterly wind that blows in the western .   indicates the lands in the eastern , covering , , , , ).
Seaon the east side of the rose was replaced with a cross, indicating the direction to long thought to be in the east, or at least to where Christ was born. 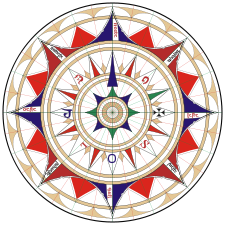 The colors on the figure are supposedly the result of the need for graphic clarity rather than a mere cartographical whim. On a rolling ship at night by the light of a flickering lamp, these figures had to be clearly visible. Therefore the eight principle points of the compass are usually shown on the compass rose in black which stands out easily. Against this background, the points representing the half-winds are typically colored in blue or green and since the quarter-wind points are the smallest, they are usually colored red.
Today, wind roses are used by meteorologists to depict wind frequencies from different directions at a location. The compass rose is used in global-positioning systems (GPS) and similar equipment and devices.
The compass rose is also seen in tile and inlay.

In flower arranging, embroidery, and woodworking. 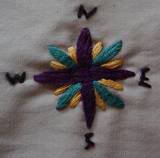 And the more flamboyant renditions are favorites in the tattoo world. 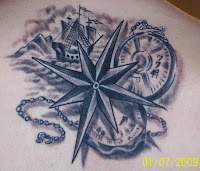 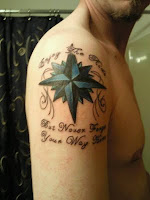 Thanks to Bill Thoen for his invaluable article.
Posted by GiniRifkin at 12:05 PM 1 comment: 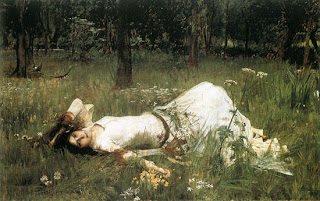 At least it seems that way to me......
Everyone else’s blog seems so dang witty. I feel totally intimidated. I shouldn’t even have a blog let alone try posting to one. I go brain-dead when I think about it. But my dear editor, Amanda Barnett, whom I love and respect, said I gotta do it.
I’ve been at this house for 5 months now, so I can no longer claim moving insanity for my ineptitude in blogging or life in general. And I’m an author for goodness sake, but it takes me months and months (sometimes years) to write a book and then there are re-writes and hey the story isn’t about me so it is much more interesting and exciting.
We moved into this house on Halloween. An auspicious sign as it is my favorite holiday and there was also a full moon. FYI-when I say we, I mean me, a goose, two ducks, three goats, two donkeys, and three cats. Was I crazy to move in the winter in ? Yes. The jury is already back on that one. It was a much smaller house, barely a patch of land (the old place had 73 acres this a little over 2) and NO BARN. But it all worked out because I have amazing friends and family.

I call this place Compass Rose. That’s the pretty element on a map that points N,W,S,E. My hope was it would mean we had finally found our way and we wouldn’t be moving any more. (please please no more moves, at least for a little while. Moving is soooo tramatic).

More on the history of the compass rose next time.

My first place was Ravenglass although the ravens never showed up. The second place was Dragon Song because it was out on the prairie in the middle of nowhere and when the wind doth blow, a moaning sound howled off the roof and down the chimney.
I felt defeated having to leave Dragon Song. I moved out there with true pioneer spirit and make it on my own grit and determination. I was master of my domain, going to get solar and wind power and get off the grid. Gonna be self-sufficient when the big one hit. Well one scrawny woman with a lawn mower met defeat in the face of nature and reality. Solar and wind power were very expensive and I realized I wouldn’t live long enough to get my money back on that type of investment. The driveway was a quarter mile long which didn’t seem such a big distance in the fall, then the snow came. I’m good at being snowbound, however, as long as there is enough feed for the animals and bourbon, chips, and chocolate for me.
Everyone worried about me being “out there” on my own. I never really thought about it much. I loved the peace and quiet and solitude and the view was exceptional. I could see the front range of the from to . The weather was dastardly however. Wind, dust, 8 foot snow drifts, 100 degree heat with no tree in sight. I planted 40 trees—they should be tall enough to sit under in another 15 or 20 years. And then there was the rain, flood, and hail season. The barn always flooded in the summer and the hail ripped everything to shreds that dared to come up and defy the other brutal elements.
So we’re on a farmlette now. City living with a “really big” yard. The barn is up, praise be and I’m trying to grow accustomed to neighbors, neighbors’ dogs, kids, radios, leaf-blowers, cars, and kindness. Yes these are the nicest bunch of folks one could have as neighbors. I know I could count on any number of them in an emergency. And the Walmart and hospital are much closer. Life is a trade-off on so many levels.
Bye for now from the eccentric author woman with the goats and donkeys. Wish I could afford a classic 1930’s car to tool around in. With the proper hat, the image would be complete.
Posted by GiniRifkin at 10:00 AM 1 comment:

As we spend our days walking on concrete in the shadow of towering buildings, with the nearest tree in a park or state forest, it’s easy to forget we are spinning through the universe on the Good Ship Earth. Easy to forget to watch the moon as she dances across the sky to a rhythm that existed before the first man. Easy to disregard the stars as they play out the fables and stories written in the constellations.
Take a moment in the month of April and dare to set free the primordial instincts locked deep inside of you. Look up. There is a new moon in Aries, a full moon in Libra, Passover, Easter, and Earth day. In other words, April offers something for everyone.
It’s the season for spring cleaning. De-clutter the house, your mind, your intentions. A time for new beginnings, wow a cosmic “do over” how often do you get a chance at that?  Oh no, does this sound like New Age mumbo jumbo. Really? Other than Earth Day there’s nothing new about any of this information. It’s not new age it’s ageless.
The days are longer since Ostera, the Vernal Equinox, the nights a little warmer. On the 18th, bundle up and seek thee the full moon. I’ll be gazing at it too and thinking of you.
We are Nature, long have we been absent, but now we return.
Walt Whitman
Oh--what will my new beginning be? I’m going to get a radical haircut. New house, new blog, new book, new me….. Of course, this might lead to getting a blow dryer and some of those mysterious hair-care products I’ve always tried to avoid. Wonder if the donkeys and goats will still recognize me?

With love and gratitude,
Gini

P.S. Feb 1865 is the only month in recorded history without a full moon.