Perhaps this is a post more suited for Halloween (Samhain), but I couldn't wait! 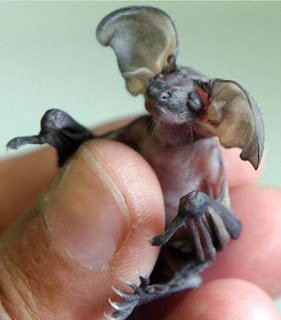 The little goblin bat (Mormopterus minutus) is a species of bat in the family of the free-tailed bats.


Roosting trees.
They are endemic to Cuba and are vulnerable due to habitat loss. During the day they can be found roosting in the palm tree, and in human-made structures. Using echolocation in a variable pattern of calls, the diet of this bat is entirely composed of insects. 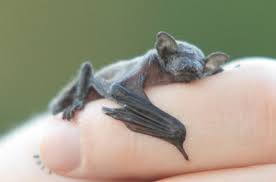 Although  many bats use echolocation, this species has the ability to change its style based on the environment it is in. 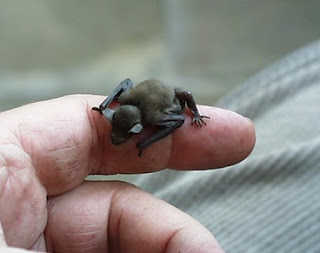 Posted by GiniRifkin at 11:38 AM No comments:

The White Temple of Thailand 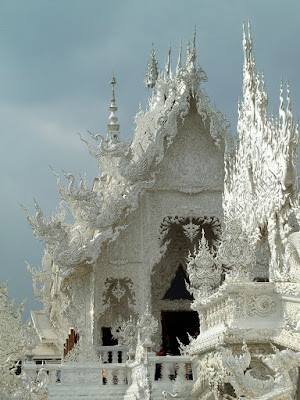 It snowed last night, and when I got up it was 5 degrees. Chores were not as much fun that morning...but it was beautiful...like living in a Christmas Card. The trees and fences were frosted in stark white, the sky so blue it hurt your eyes.

I heard that special scrunchy sound made only by walking on snow. Then the peacefulness was broken by a flock of noisy Canada geese flying low overhead.


While feeding my rambunctious, hungry "herd", 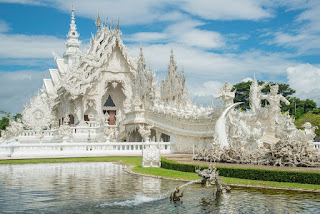 I thought how fortunate I was to be enjoying such a magical moment. And gazing at a world dipped in snow I remembered an article about the White Temple of Thailand.                               Wat Rong Khun, stands outside the town of Chiang Rai. Contemporary, unconventional, and privately owned, the white color and the use of pieces of glass in the plaster, sparkling in the sun, make it unique among temples. 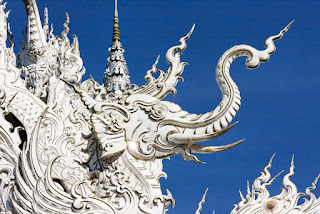 Built in 1997, by Thai visual artist, Chalermachai Kositpipat to date the temple is not finished.
Eventually there will be nine buildings including a holy prayer room, a hall to enshrine Buddhist relics, a meditation hall, the monks living quarters and an art gallery. 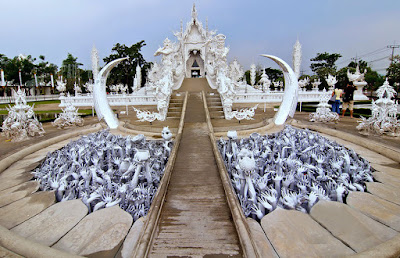 The main building, is reached by crossing a bridge over a small lake. In front of the bridge are hundreds of outreaching hands that symbolize unrestrained desire. 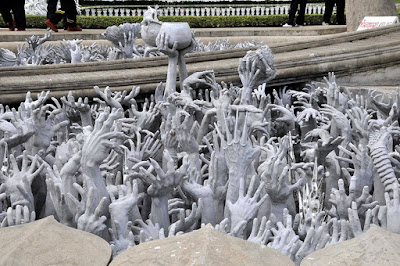 The bridge proclaims that the way to happiness is by foregoing temptation, greed, and desire.

The interior houses a gallery of great visual contrast. Lots of reds and oranges with murals of flame interspersed with modern day and ancient people and characters. It is said to be quite unsettling.

(Although they can be found on-line, photo's of the interior are forbidden.) 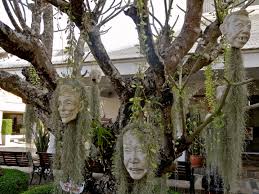 There is something both very romantic and
very macabre about this place!

Posted by GiniRifkin at 11:32 AM No comments: 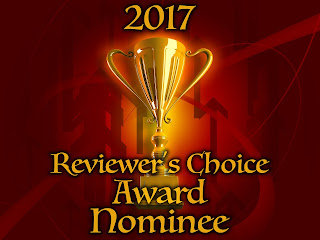 
Solace Goodeve, one of Mother Nature’s favorite Fae Warriors, is assigned to Earth to help save the planet. Reptile invaders, disguising themselves as humans, 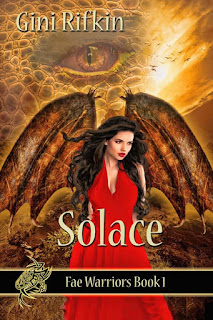 are waging a takeover—and Mother is mad enough to eat asteroids. Solace is ready to prove herself as a warrior, but having a human for a partner is not in her battle plan—even if the man is rugged, ripped, and ready for action.

Ex-Army Ranger, Tanner Jackson, has seen his share of black op missions. The last one took a toll on both body and soul. Tanner isn’t looking for love, even though his new partner is six-foot-tall and drop dead gorgeous. However, after Solace shows him a new meaning to working undercover, he may have to reconsider that possibility.

Excerpt:
“I mean it Solace. What’s going on? Who do you really work for?”
She opened her mouth then closed it, and those lips he coveted flatten in to a line of determination barring words she seemed to be fighting to hold back.
“If you have to ask, I can’t tell you,” she finally said, her gaze searching his face as if she sought some grand truth, her expression almost one of pain. “I really do need to see everything.”
Tanner balled his hands into fists, trying to keep his cool. Accustomed to giving orders, blindly take them went against the grain. It went against his instincts. It went against his training. What if she were lying? The stuff she was about to see was beyond top secret. It was experimental, and in the wrong hands, it could bring down an entire country.
“Please,” she said.
Although unspoken, the words trust me seemed to fill the space between them.
“It truly is important,” she added.
Tanner stepped in front of her. She didn’t blink or flinch, but rather she calmly returned his malevolent glare, the one he’d perfected to scare his worst combat enemies. Her show of toughness turned him on. And friend or enemy, he wanted her—right here, right now. He eased closer, his body pressing hers back up against the wall. Recollections of being with her at the party, and stolen kisses on her balcony, flooded his mind. “Are you remembering what we shared that night?” he asked.
In answer to his question, a hint of a smile curved those luscious lips. “Business first,” she whispered, against his cheek. “I promise it will be worth the wait.”
“I intend to see you keep that promise,” he said, bumping his hips up against hers.