Don't start the Revolution without me! 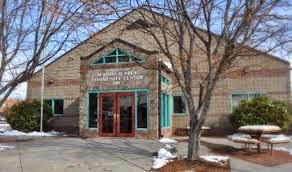 At the Berthoud Community Center, Janice and Wayne Gibb shared facts and memorabilia from their adventures in Revolutionary War re-enacting. 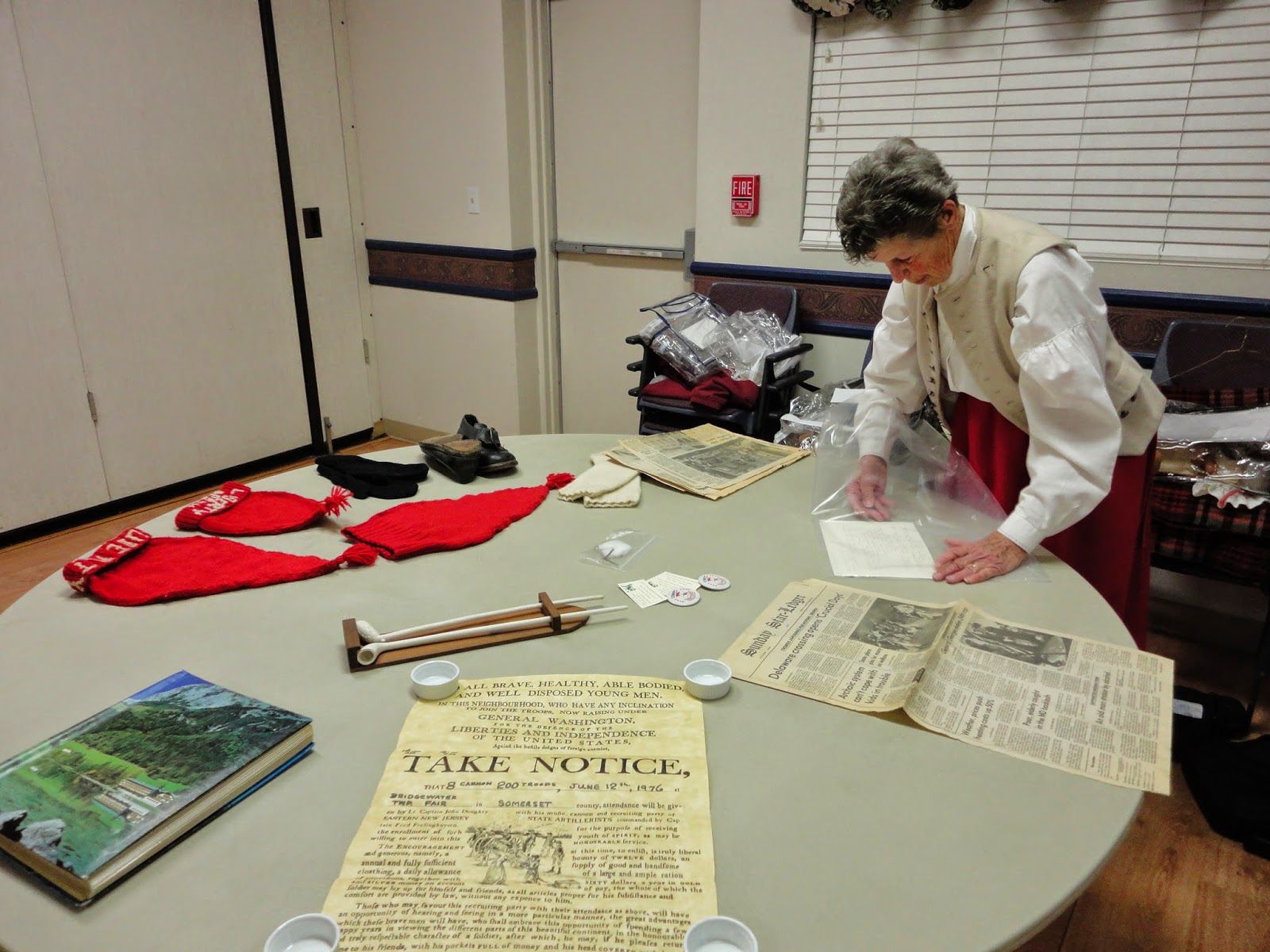 Living in New Jersey during the bicentennial years, Janice and Wayne and their three children, Wright, Brad, and Brenda, joined hundreds of history buffs as they painstakingly re-enacted the battles that took place practically in their own backyard. From the Battle of Lexington in1775 to the surrender of Yorktown in1781 each moment was faithfully choreographed, with one battle re-enacted precisely 200 year later on the exact spot at the exact time of day. 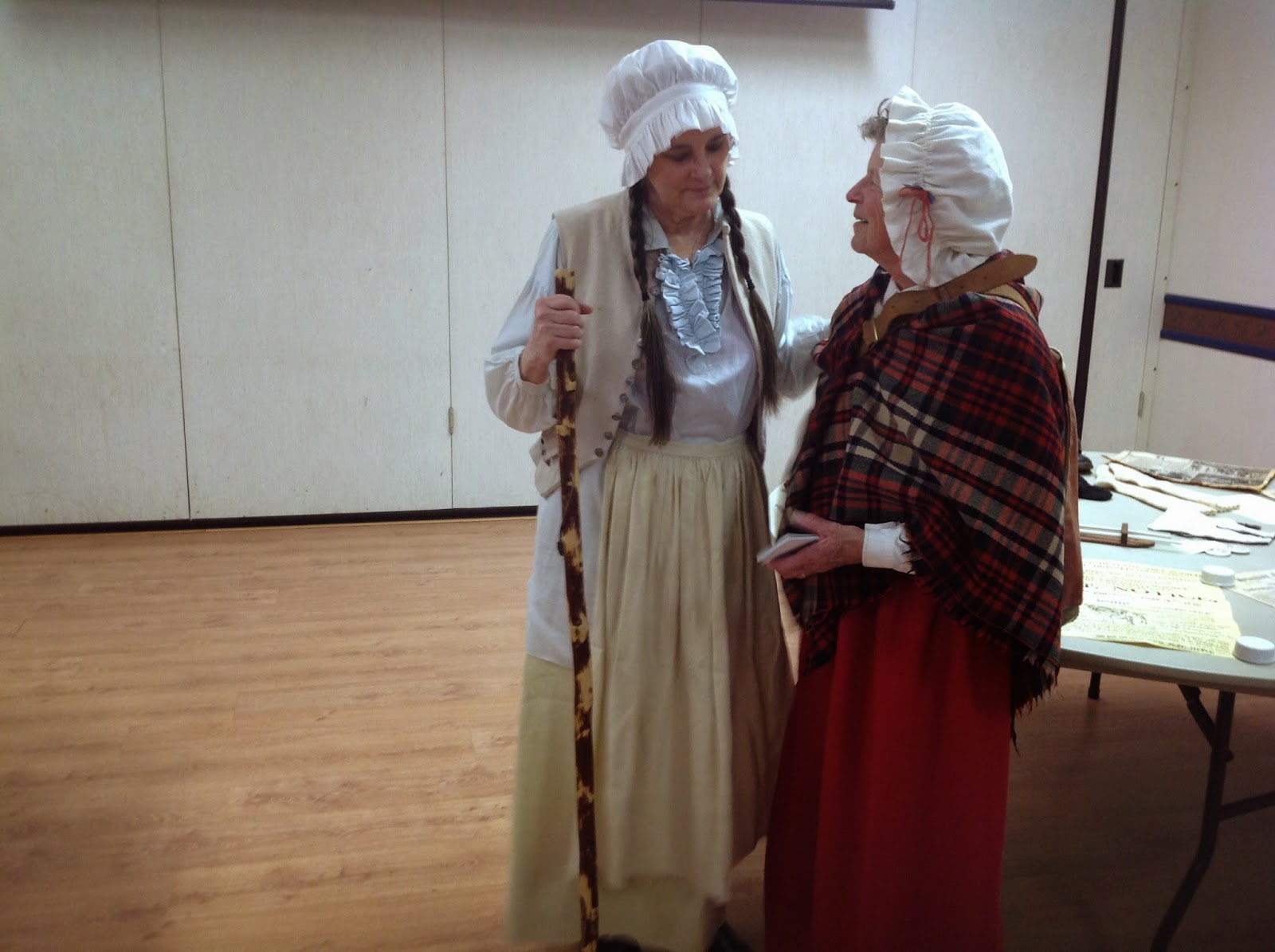 When Jan asked if during her talk I would dress as a camp follower, I jumped at the chance. It made the experience so much more personal and fun for me. I wore the summer outfit of homespun linen skirt, cotton blouse, vest, and apron.

Camp followers broke camp as the men marched onward. They also cooked the meals in large cauldrons and in large quantities, the menu including whatever could be gleaned from the countryside as they soldiered on. In camp and on the battlefield they nursed the sick and wounded. In their "spare" time they mended clothes. 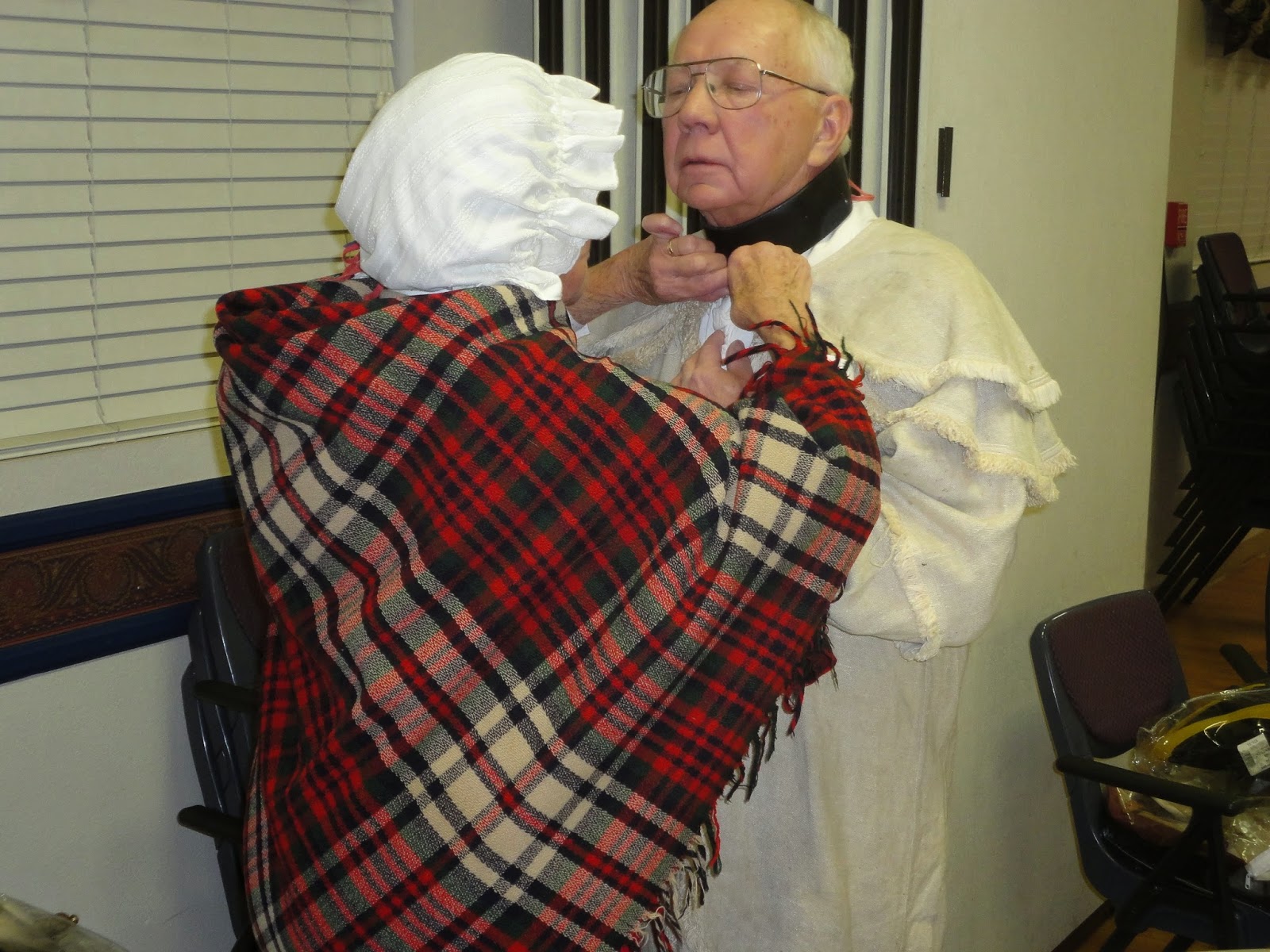 Jan wore the winter outfit of pure wool. She said it kept her warm in the coldest of conditions. Her shawl, fitting snuggly around her shoulders, is kept closed with a thorn plucked from a Hawthorne tree. No safety pins allowed! 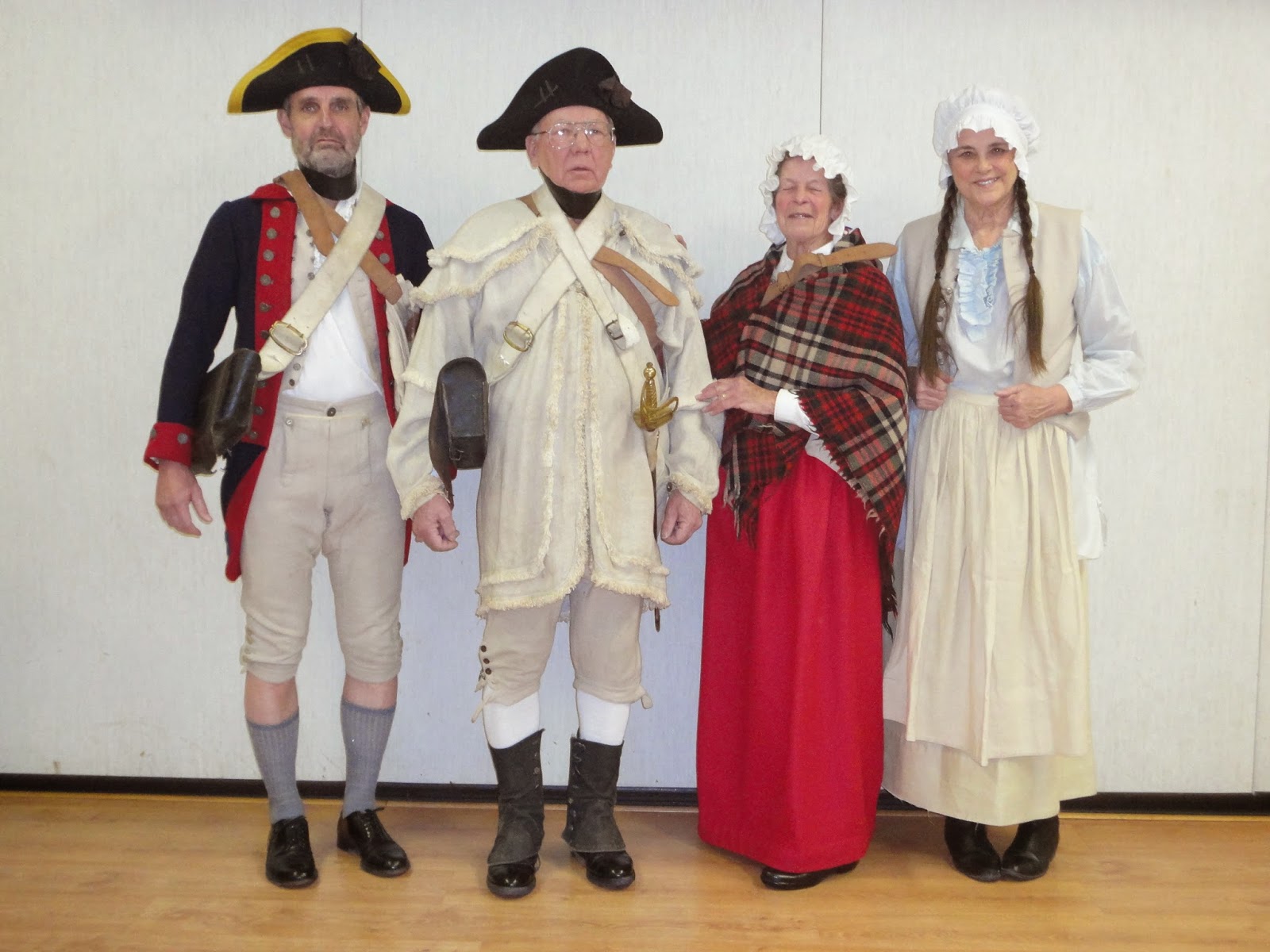 The men had fun dressing up too. Clyde wears a linen frock coat with a double collar which will keep his shoulders dry. Milan wears a men's blouse that doubles as a nightshirt, and the buttons on his spiffy coat are struck with the image of a canon. 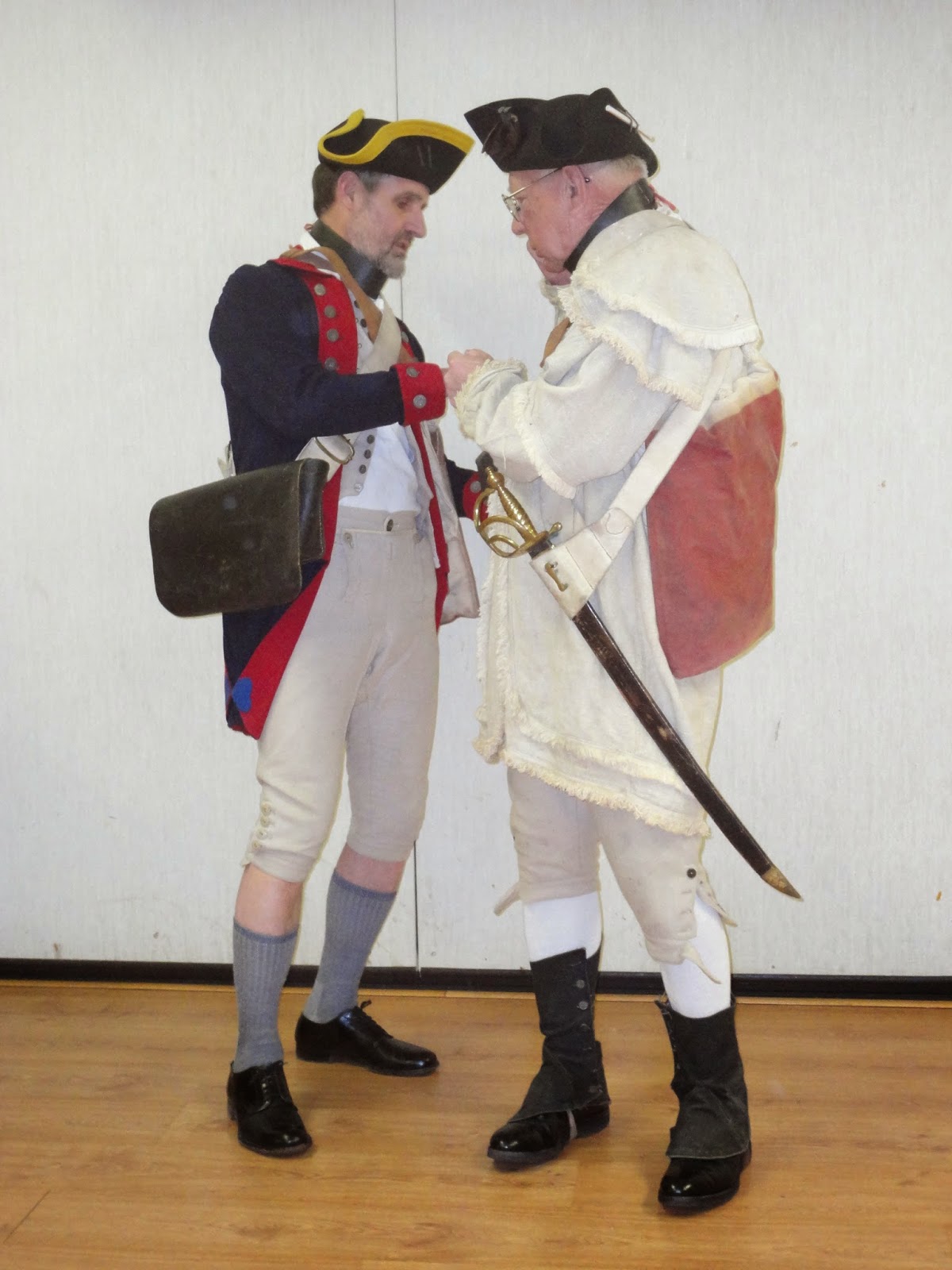 Both wear  Tri-corn hats and leather collars to protect the neck in battle from attack by bayonets, knives, or swords. 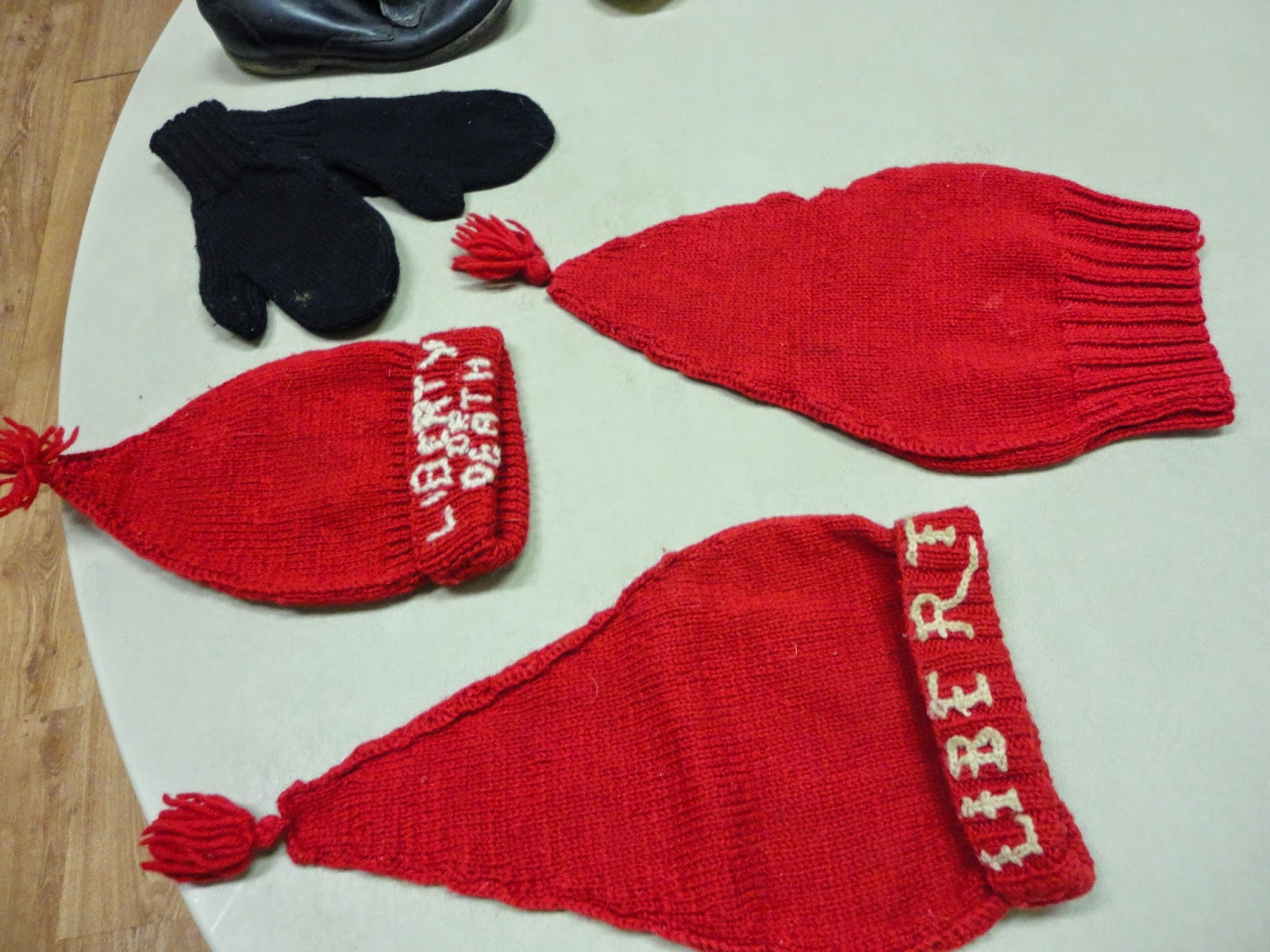 Their back packs contained dry socks, a red cap, mittens, tin cup, cartridge packs, wads, lead balls, and possibly a blanket which was rolled up and placed under the buckle straps. 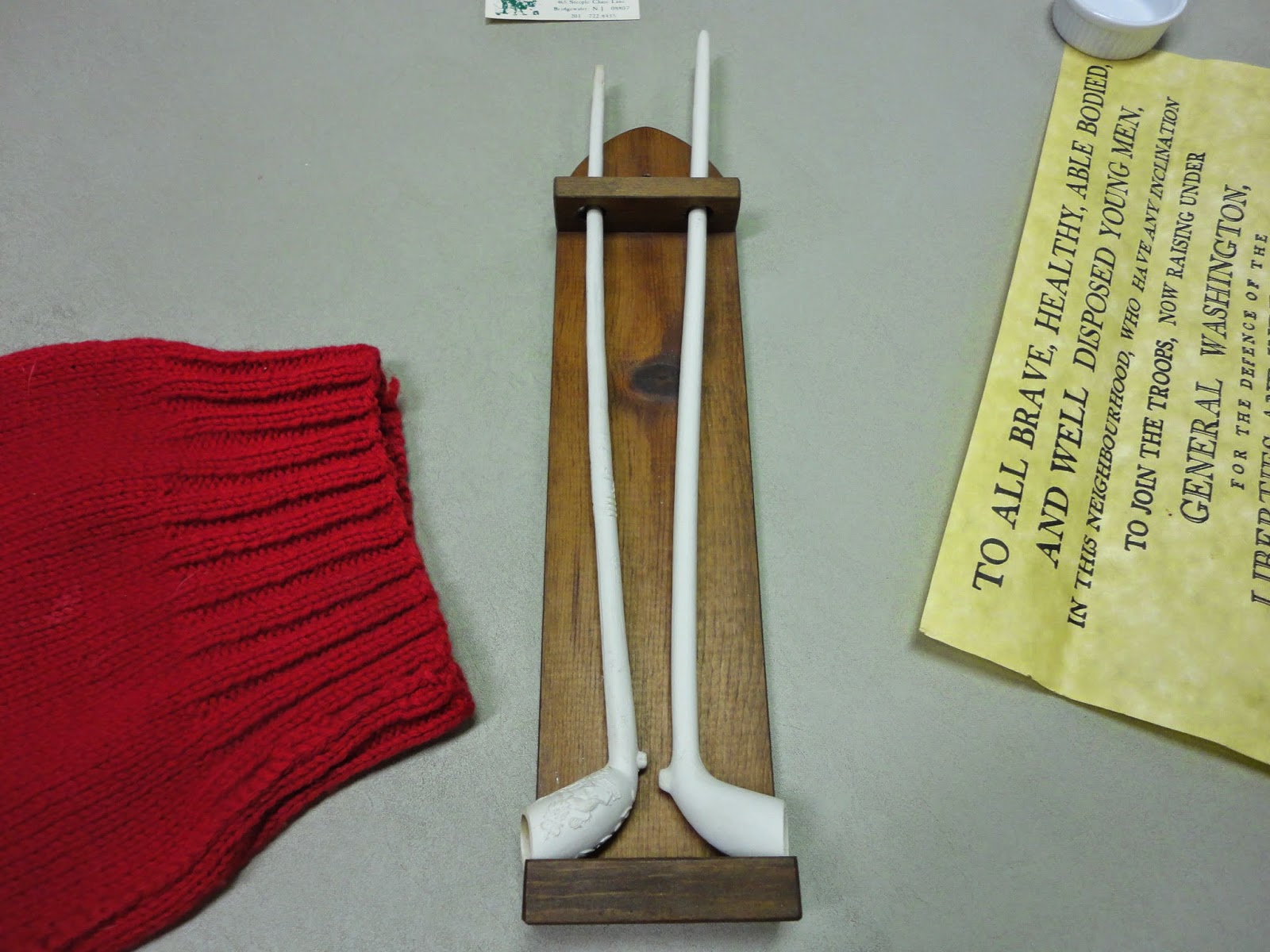 In rare moments of leisure, while sitting around the campfire, the clay pipes would come out. There was a special place in the Tri-corn hat to hold that most coveted item.


Jan, Wayne, and family mustered with Captain John Doughty's Company, the East Jersey Militia of the Continental Army. The company was made up or approximately 20 people. 5-6 on canon, 5 fifers and drummers, 5-6 artillery militia at arms, 1 flag bearer, and 1-2 camp followers.

The Gibbs were very involved with the artillery aspect of re-enacting, and they attended artillery school at West Point to learn the proper method of loading, firing, and caring for their 3 pounder. What a thrill that must have been. 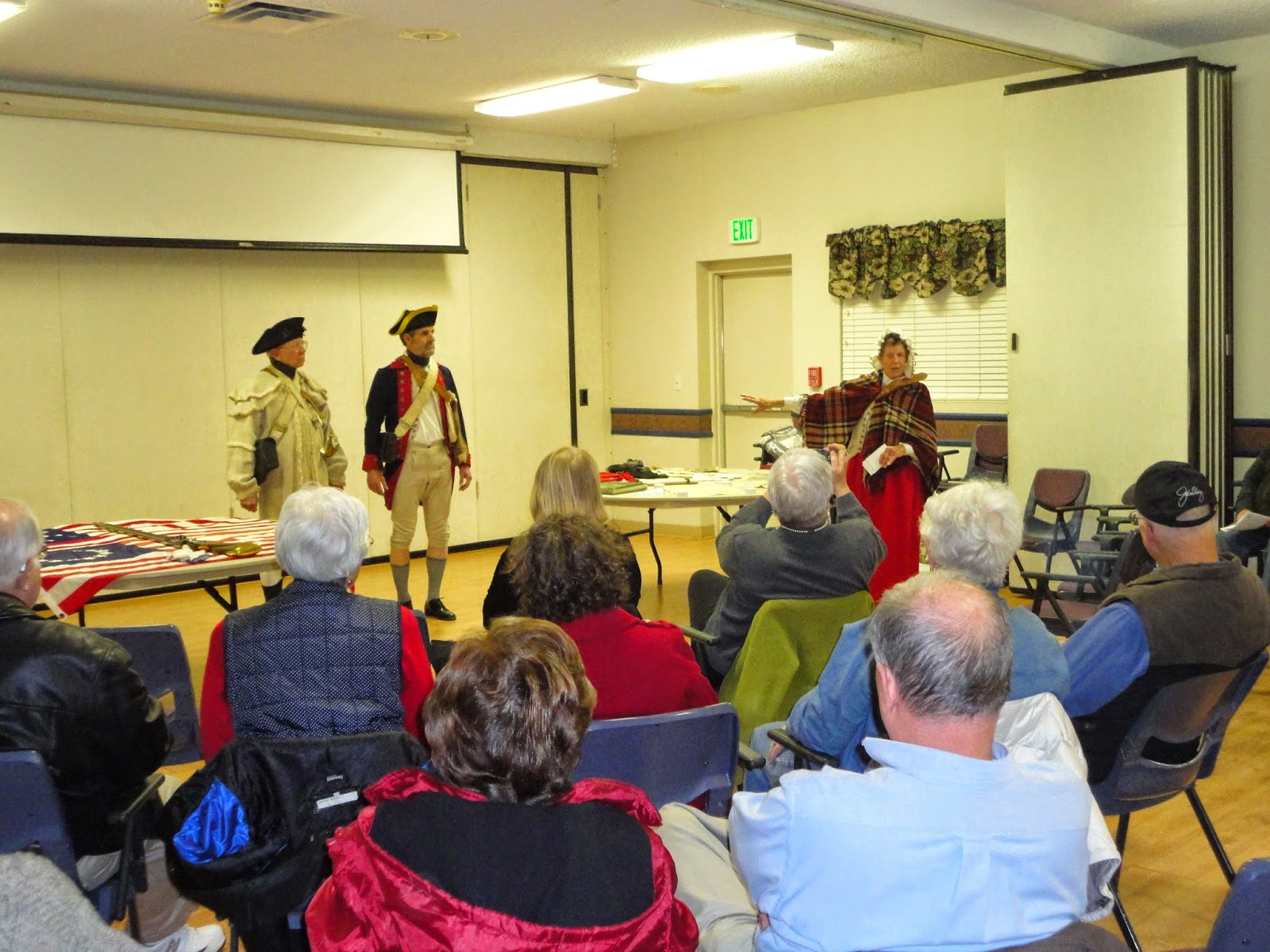 Jan's enthusiasm for history was evident as she taught us of a time so long ago. The family "fought" in many battles, but she thought the most memorable one was the Christmas crossing of the Delaware. "George Washington went by Durham boat, their beloved canon crossed on a raft, and the foot soldiers and camp followers went by bridge. 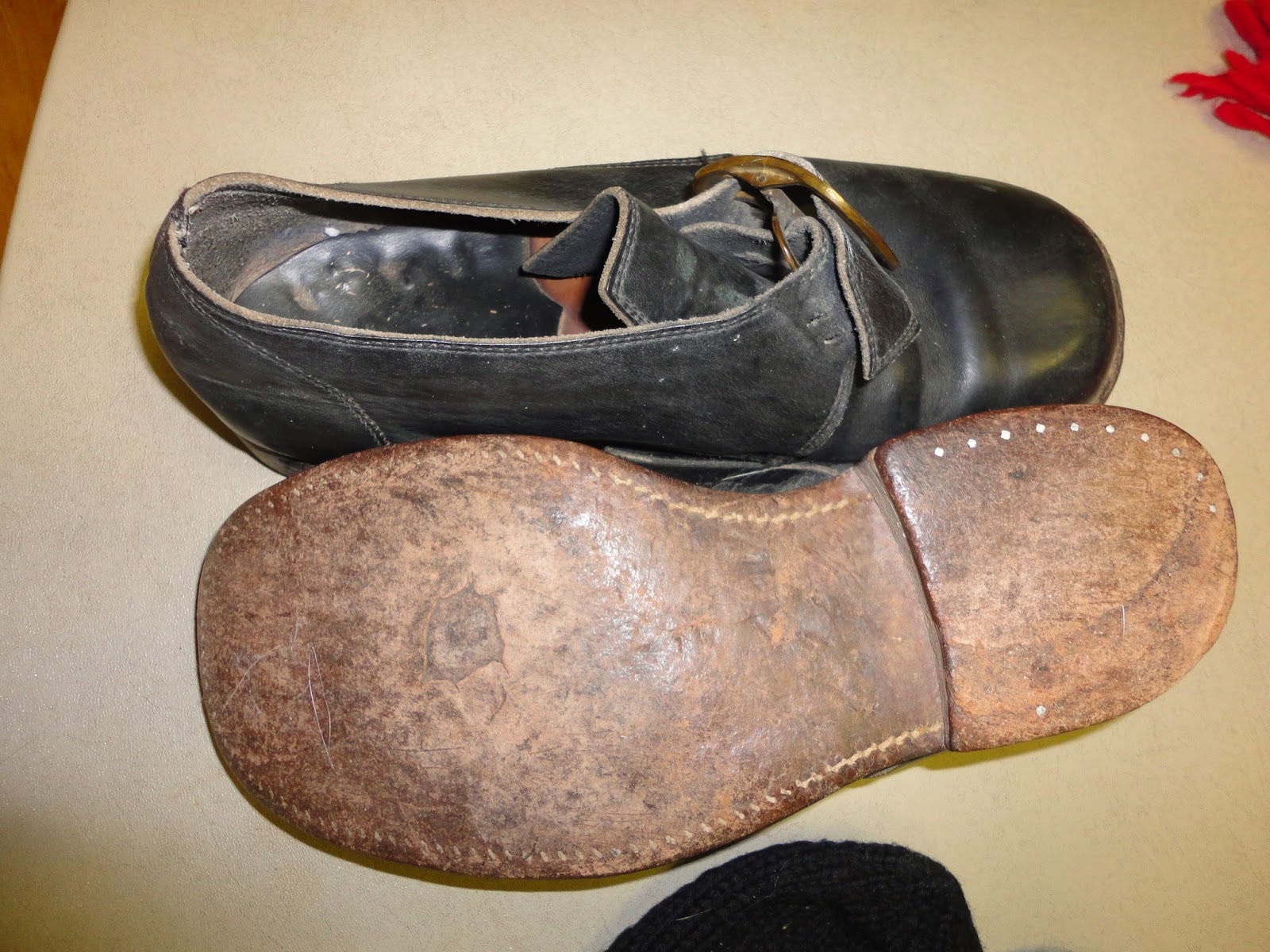 The ten day forced march was also a remarkable accomplishment. They even wore holes in their authentic shoes. 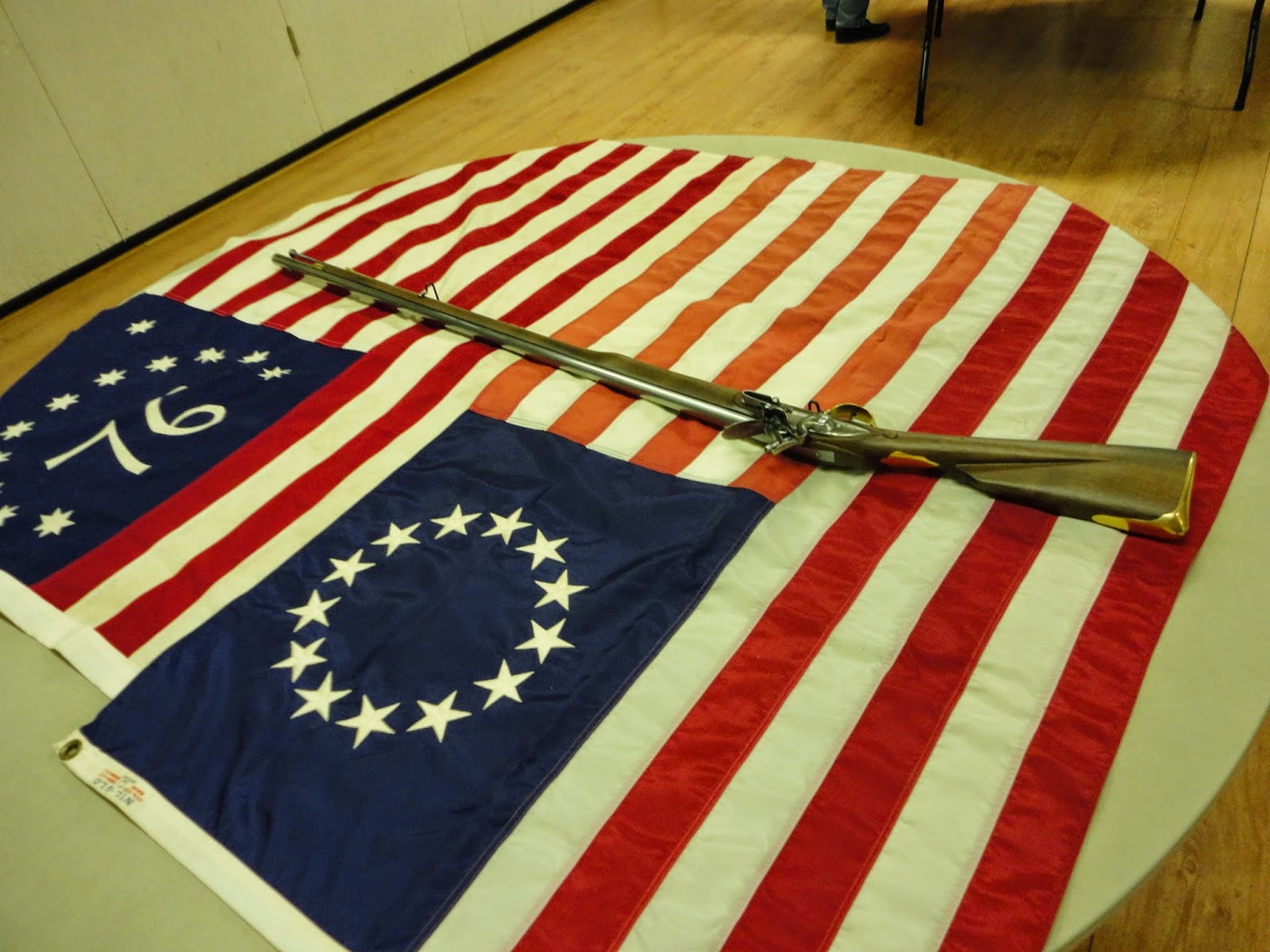 ﻿
The flags were really beautiful, and my heartbeat quickened as I imagined them flying over the smoke-filled battle fields where our forefathers fought for our freedom. 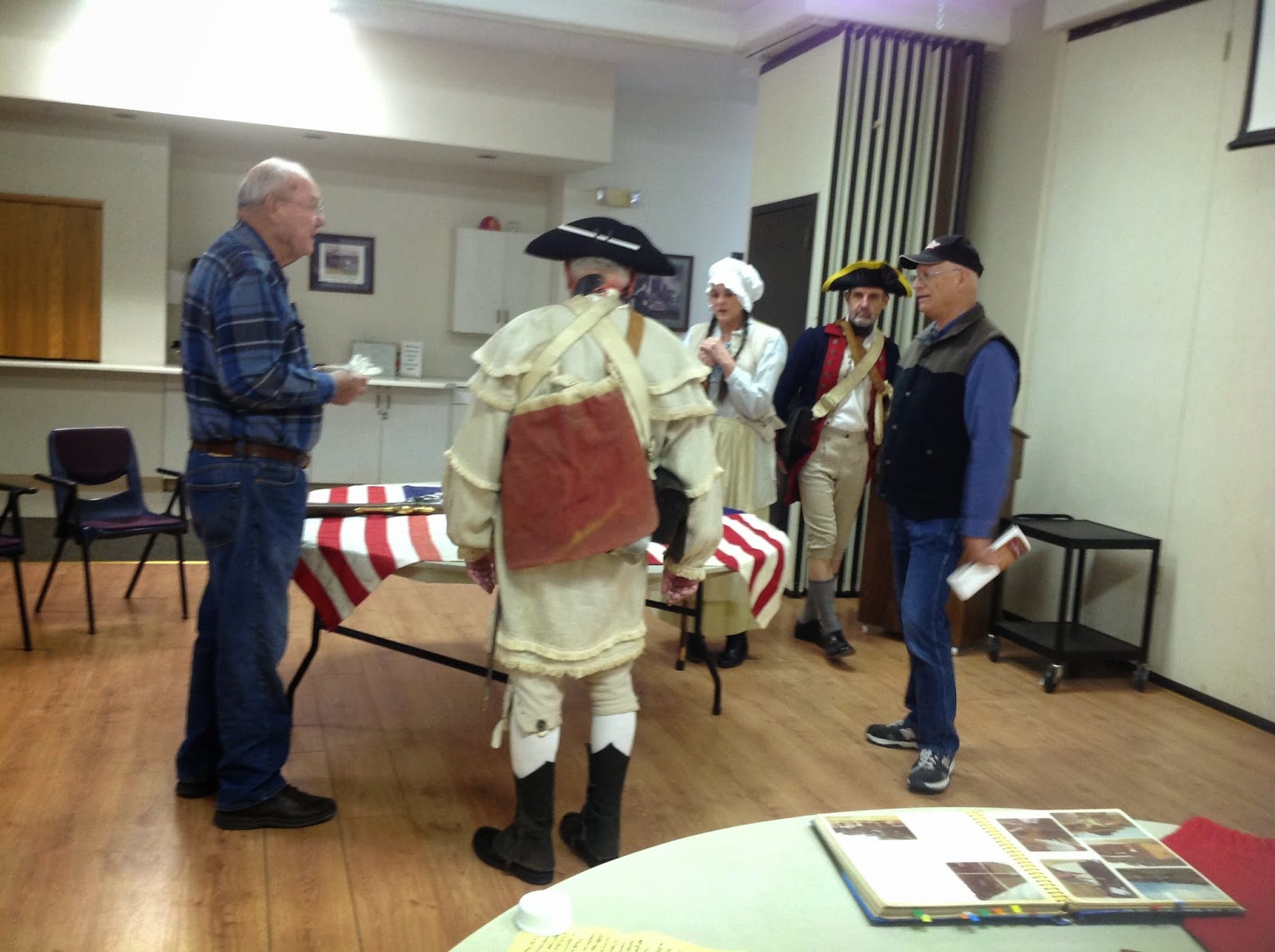 The weapon of choice for both the British and Continental Army was the Brown Bess. Wayne explained it was so named because the barrel eventually rusted to a brown hue. 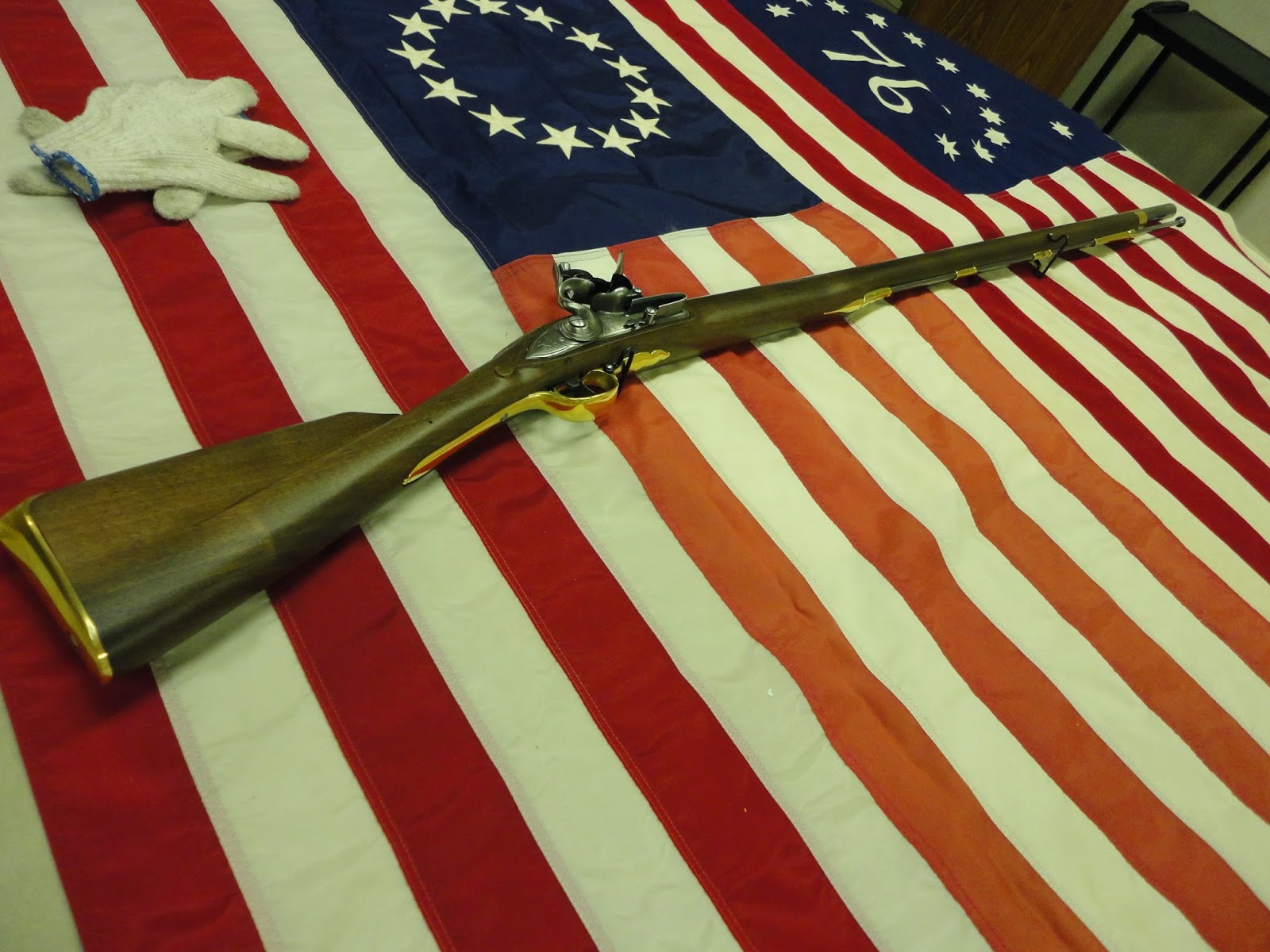 The smooth bore flintlock muzzle loader was .75 caliber and weighed about 10-13 pounds.

It was a beautiful evening and we all learned a lot, and we are thankful for folks like the Gibbs who love and keep our history alive. 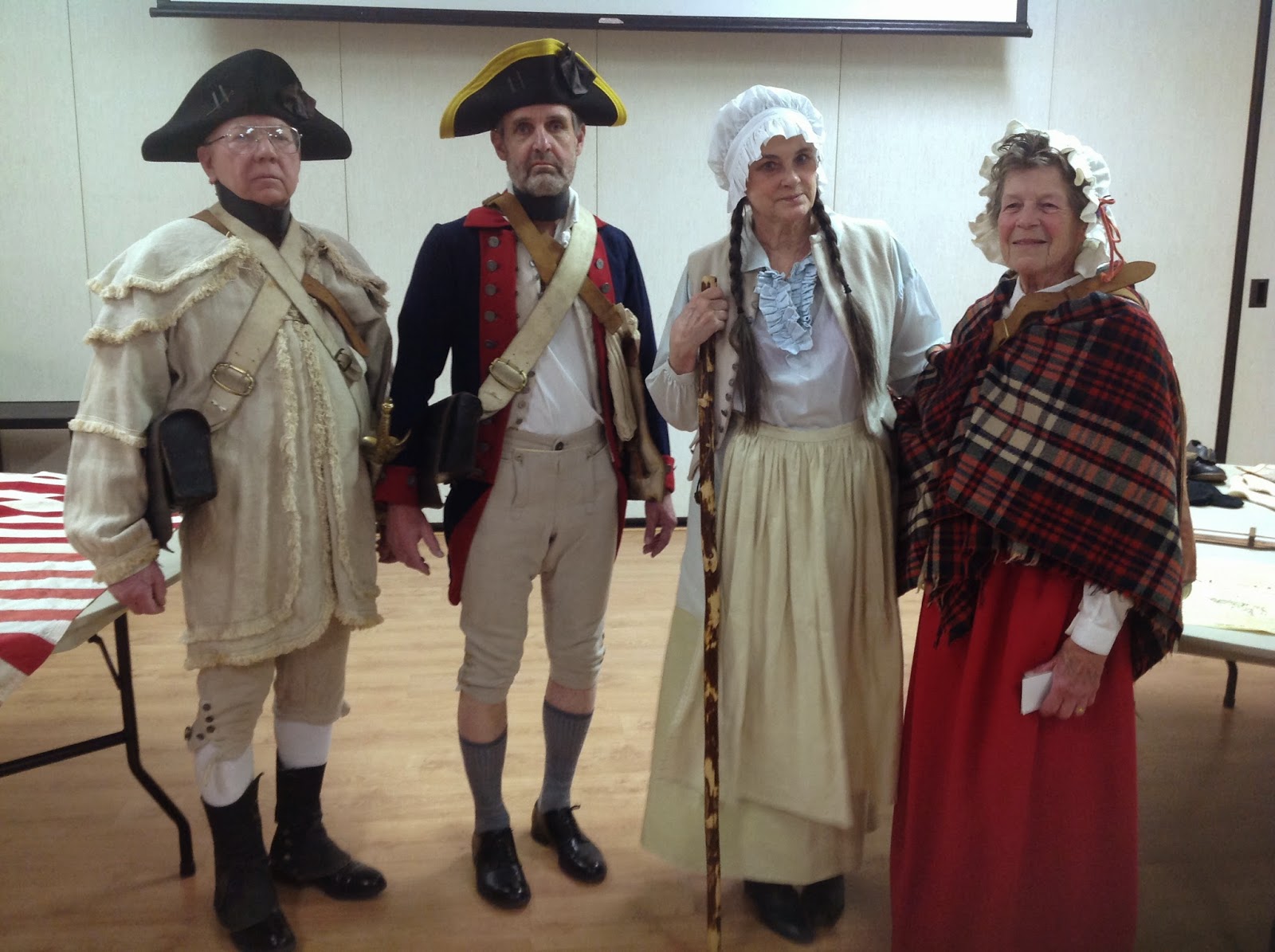 Posted by GiniRifkin at 1:25 PM No comments: