A few weeks ago, a wonderful longtime friend, Ken Wee, dropped by. 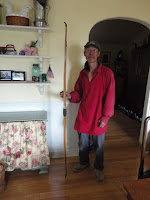 Maker of bows, arrows, and atlatls, he brought along an authentic English longbow. What a thrill to see and hold the medieval weapon. It was beautiful, taller than me, 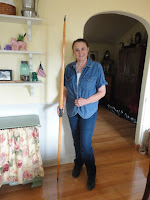 fashioned with mother-of-peal inlaid where the arrow would rest and gold leaf on the leather grip. 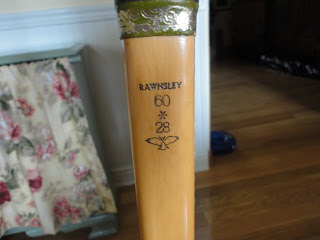 Made by Rawnsley, bow-maker to the Queen!
Thoughts of longbows inspire visions of Robin Hood. 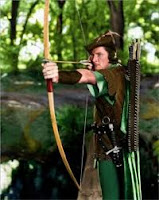 but it was a much earlier weapon, and not invented by the English. Although it is commonly referred to as the English Longbow, it was the achievement of the Celts in Wales around 1180 C.E., and not used routinely by the English military until years later.


The bows were often made-to-order, therefore the length of the weapon could vary considerably, ranging up to even 7 feet. They were incredibly strong, made from center and sap wood, the width being around 5/8 inch wide and in the shape of a D. The preferred wood to use was yew, which was hardened and cured for 4 years for best results, but ash, hazel and elm were also employed. 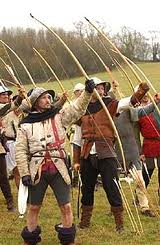 The bow had up to a 200 lb. pull, thus requiring tremendous strength and a life-long practice and training.  Supposedly, one study showed the skeletons of archers actually had bone spurs caused by their overdeveloped musculature.


The bow could shoot over 1/2 mile with enough force to knock a knight off his horse. The  arrows shot commonly from the longbow were called bodkin arrows of varying length depending on purpose, designed for breaking through chain mail. With the force of the longbow behind it, it was capable of penetrating plate mail of all but the best quality. Here is an interesting website where actual testing of this theory was made http://www.isegoria.net/2011/08/longbow-vs-armor/  One story states that an arrow shot from a longbow pierced an oak door 4 inches thick. 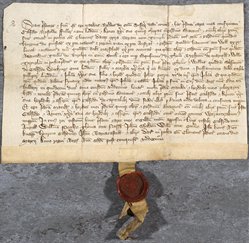 The English Archery Law of the 13th century ensured that English men would become experts with the bow and arrow. In 1252 the 'Assize of Arms' ordered by law that all Englishmen between the ages of 15 to 60 should equip themselves with a bow and arrows. (One wonders if these were longbows because as stated, practical use of them required such strength and practice.)

The Plantagenet King Edward III took this further and decreed the Archery Law in 1363 which commanded the obligatory practice of archery on Sundays and holidays! The Archery Law "forbade, on pain of death, all sport that took up time better spent on war training, especially archery practice".  King Henry I later proclaimed that an archer would be absolved of murder, if he killed a man during archery practice. Now there is a great plot point for a medieval mystery. 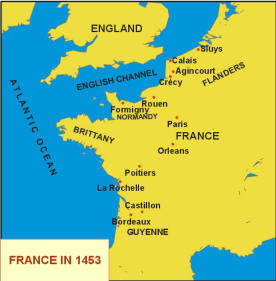 The Hundred Years War was where the longbow really showed its strength. Some say that in the war’s most decisive battles, the longbow was the weapon that turned the tides. 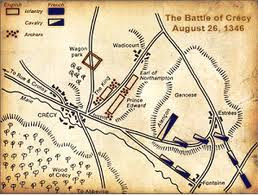 The battle of Crecy was one of the largest battles of the Hundred Years War. With 35000-40000 French against 12000 English, the English obviously being hopelessly outnumbered. But the English had one trick up their sleeves, 6000 longbow men. The French, laughed as the English, charged, but not for long.


As the French charged, the English unleashed volley after volley of arrows, that’s 15 or so a minute or one every 4 seconds. The rain of arrows cut through the crossbowmen killing over 12000 of them. The arrows also killed ranks of infantry that would have completely destroyed the English’s 6000 infantry but whose chain mail did nothing against the 200 pound force behind the arrows. 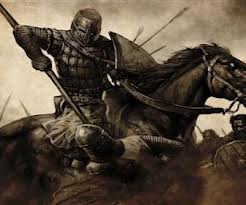 The only thing the English had to worry about was the knight, the tanks of the Middle Ages, but with repeated effort, the arrows cut them down as well. The English prevailed, only suffering the loss of 1000 men while the French suffered 30,000 killed and wounded. Eleven princes of royal blood were also killed, much to the dismay of the English king who would have liked to have held them for ransom. 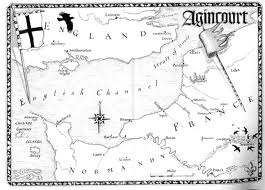 In Agincourt another battle was won against impossible odds, and the social structure of the middle ages was changed forever. A peasant armed with a longbow was able to kill a knight wearing full plate armor. One arrow shot by a peasant could kill the most powerful knight on the battle field.

Refuting the myth of the longbow being an uber weapon during these battles, is this very engaging website http://wapenshaw.wordpress.com/2007/06/02/myth-of-the-longbow/  The debate goes on, but the myth lives on as well. 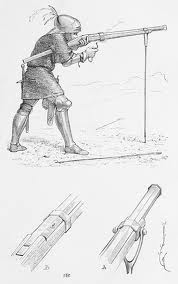 Around this same time, guns and cannons were being invented, yet the longbow was still the leading weapon on the battlefield. Guns, with an even slower rate of fire and a tendency to explode on the user, allowed the longbow to continue its reign of dominance as the number 1 weapon. Cannons were also slower to reload, at best only being fired 2 or 3 times in one battle. And while the cannon certainly left a bigger hole in whomever it hit, the longbow could kill many more French. 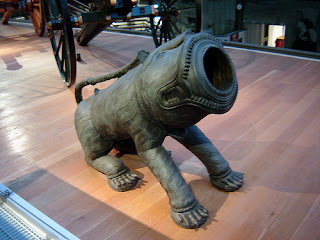 The longbow contributed to the way our world works today. War being one of the greatest mothers of invention, both the English and the French rushed to discover new technologies, pulling Europe out of the Middle Ages. And peasants were able to assert their power against the noble knights. This is why the English longbow is often considered the most important English military invention of the 1300s. It changed the political face of Europe forever.

Kudos and thanks to these two websites for information used in this blog post.

Posted by GiniRifkin at 11:46 AM No comments: