My amazing wonderful Precious:
My unicorn with glorious horns,
a little white beard, and split hooves.
You were so aptly named, for precious you surely were.
I loved you so much.
Birth date reckoned 1996
Died 2-21-2012 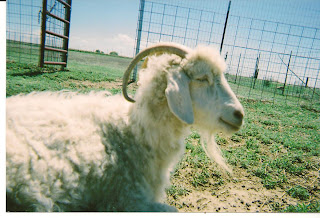 You and Cowboy were my “first born”. We went through a lot together, you helped me to get on with my life after died. When I first saw you at the Boulder Humane Society I fell in love with you and knew immediately you were the first animal to be rescued, then Cowboy ran up “take me too, take me too.” 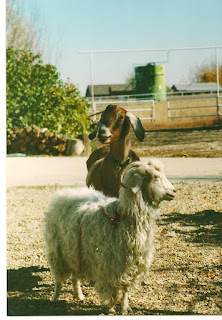 You were laying with the front end of your body in a wheelbarrow, your hooves, three of them because you only had three feet, were terribly overgrown and your long beautiful white mohair was a big matted mess. You had blood sucking lice and were sick. I looked at the lice under ’s microscope, yikes. 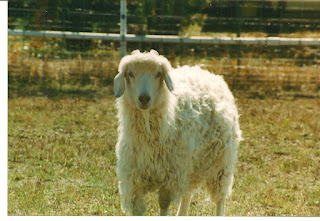 I learned to love goats because of you and Cowboy. You suffered through me learning how to trim hooves and what to feed you and we spent hours every year trimming your hair. You were scared of the buzzy thing so I cut it by hand with a blunted scissors and you were so patient. We played the radio and listened to the oldies. At first you were strong enough to stand on the big wooden spool that made it a lot easier on my back but later I just sat on the floor and you stood on an old chaise lounge pad. I tried to spin the hair with a drop spindle but wasn’t very good at it. Now I have all those bags of hair but not you. 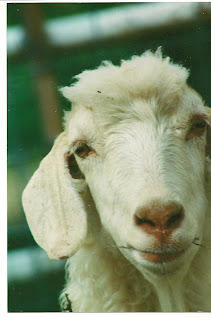 You are the most noble, gentle, courageous, and kind animal it has been my privilege to care for. You learned to cross the little bridge at the first place so smart, so brave, and ran up the ditches with the best of them. When I broke my pelvis and was on a walker we were a pair to draw too hobbling across the field. The one time I put the donkeys and you guys together, Jack went down in the ditch and his head was ground level and you head-butted that donkey to pay him back for chasing you around, talk about a gutsy little gal, that was you. 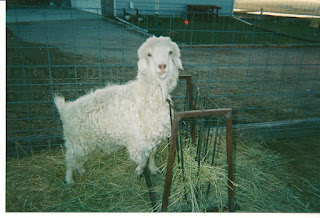 After 13 years I guess I should have more stories to tell about you and the times we had. But they were just simple and glorious days of companionship (a tremendous gift) and smiles, it went by so quickly.
You came home in Craig’s horse trailer and walked all the way to the barn. You always did everything I asked of you. One day you took it in your head to climb the steps at the house with four doors. We played Goat Show Barbie and Cowboy Ken. I thought you bit me once but you were just trying to eat my flannel shirt. 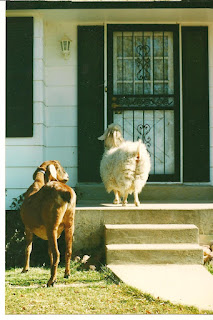 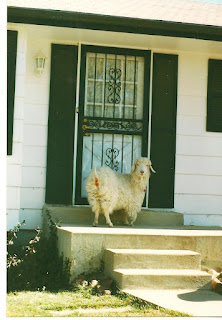 We should have called first, Cowboy.
I don't think anyone is home
Your favorite treats were animals crackers, especially the elephants because, hey they are the biggest. You looked so cute in your little red coat. The ducks and goose liked to sneak in the barn and eat your chow and mess up your water. You ate their cracked corn to pay them back. Lolly goose also liked to pluck at your hair, you would stand there and let her as if you were getting a beauty treatment.


Please forgive me if I ended your life before you wanted. I hope it was relieving your pain, the indignanty of your brain outliving your body, ending the struggle and giving you peace. If there is any cosmic justice you now have 4 feet and are running around with Cowboy. 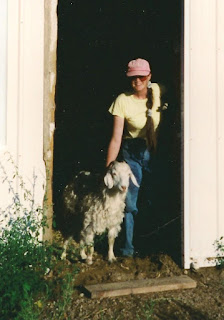 I love you.
From my arms to the Goddess……Cowboy and Bill are waiting.
MOM
﻿
Posted by GiniRifkin at 10:46 AM No comments: 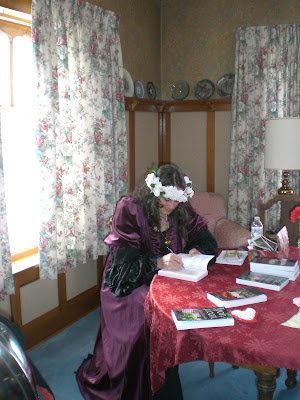 My thanks to the Berthoud Historical Society for sponsoring my booksigning at the beautiful McCarty/Fickel home built in 1916. 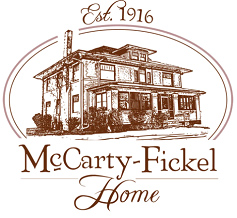 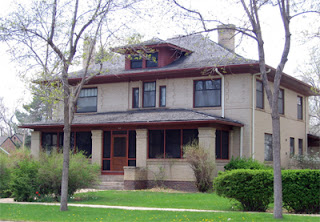 Somewhat unassuming from the outside, but spacious and bright and very remarkable within.  There is such a happy atmosphere in the house, nearly all of the furnishings are original and I think (or at least hope) many happy times were shared there. 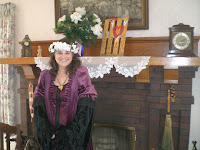 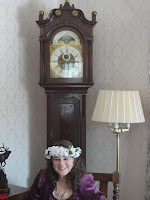 My sister and two friends (Evy and Angela) came, they already have all my books but offered support and truly brightened the day. Darn, I didn't get a photo of them....It was nice to get to know Virginia, John, and Mark a little better. They are instrumental in running the Historical Society. Gees, didn't get their photo either, well wasn't it just a "me me me" day. Not too self-centered....

Didn't have any other "fans" show up, but above mentioned folks bought a few books. It was VERY cold that day, but the sun came out and all in all it was a fun experience and a day filled with positive energy.

Looking forward to the day when I'm famous (rich is okay too) and people are lined up around the block to see me! Beautiful dreamer...

Gini.
Posted by GiniRifkin at 11:02 AM No comments:

What do groundhogs predicting the weather, ewes, a Pagan goddess, a Christian saint and spring cleaning all have in common? They are each intertwined into the history of Imbolc, the feast day of Brigid, on February 2nd.

This holiday is one of the Celtic fire festivals and is also called Oimelc, an Irish term that means ewe's milk. Traditionally, this time of year exhibited the first signs of spring shown by the lactation of ewes. It is a cross-quarter day signifying the midpoint between the Winter Solstice and the Vernal Equinox. 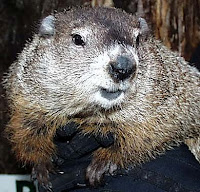 Being a cross-quarter day it is also a reverse barometer. Just like the logic used on Groundhogs Day. If the weather is fair (sun is shining and Punxsutawney Phil sees his shadow) the weather will take a turn for the worse and there will be more weeks of winter. If the weather is bad, good news, better weather is on the horizon. 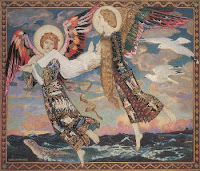 The Christians usurped the day and tried to redirect the Pagans to worshiping St. Brigit and also called it
The Celtic goddess was  Brigid the Light-Bringer, it tied in nicely. 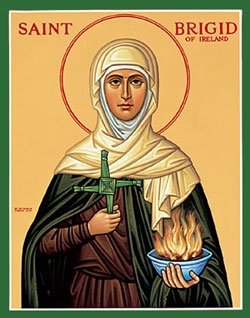 St. Brigit is known for her special cross, said to have been woven from rushes as she tended a terminally ill Celtic chieftain, telling him the story of Christ and converting him on his death bed to Christianity. Many streams, trees, mounds are named for the Saint in the

In many parts of the world, February is a harsh and bitter month.  In old , the month fell in the middle of the period known as Faoilleach, the Wolf-month; it was also known as a’ marbh mhiòs, the Dead-month.


But although this season was so cold and drear, small but sturdy signs of new life began to appear: Lambs were born and soft rain brought new grass. Ravens begin to build their nests and larks were said to sing with a clearer voice.

Brigid is also known as the daughter of the Daghda, the “Great God” of the Tuatha de Danaan (faeries). In folklore he calls her a “woman of wisdom…a goddess whom poets adored, because her protection was very great and very famous." Since the discipline of poetry, was interwoven with seership, Brigid was seen as the great inspiration behind divination and prophecy, the source of oracles.

She is the goddess of poetry, healing, and smith-craft. Also described as the patron of other vital crafts of early Celtic society: dying, weaving and brewing. A goddess of regeneration and abundance, she was greatly beloved as a provider of plenty who brought forth the bounties of the natural world for the good of the people. She is closely connected with livestock and domesticated animals. She herself had two oxen called Fea and Feimhean

This is a good time for spring cleaning of house, hearth, and spirit. So burn a candle, get out the broom, take heart and have hope as we look forward to the rebirth of the earth and our creativity. May your spirit be renewed. 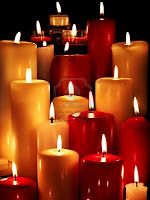 Hail, Brigantia! Keeper of the forge,
she who shapes the world itself with fire,
she who ignites the spark of passion in the poets,
she who leads the clans with a warrior's cry,
she who is the bride of the islands,
and who leads the fight of freedom.

Hail, Brigantia! Defender of kin and hearth,
she who inspires the bards to sing,
she who drives the smith to raise his hammer,
she who is a fire sweeping across the land.

Bride of the earth, sister of the faeries,
daughter of the Tuatha de Danaan,
keeper of the eternal flame.

In autumn, the nights began to lengthen,
and the days grew shorter, as the earth went to sleep.
Now, Brighid stokes her fire, burning flames in the hearth,
bringing light back to us once more.

Winter is brief, but life is forever. Brighid makes it so.