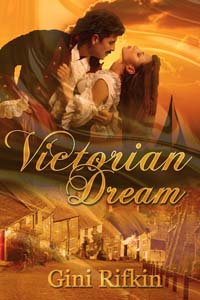 Here is the cover art for my new book "VICTORIAN DREAM".
The artist is Debbie Taylor.

Emotionally scarred after the death of his wife, Yankee sea captain Walker Garrison bans romance from his personal manifest--shipbuilding is his only passion. The transatlantic partnership between Walker and Trelayne's father seems a grand idea until her parents are critically injured and one of 's crew turns up dead. On the trail of the man responsible, sets sail for . After meeting his new partner's daughter, protecting Trelayne and not falling in love with her may prove impossible.


“Have I missed the first waltz?” Walker asked, escorting Trelayne to the center of the room.
“No. I’ve allowed none to be played, and my poor guests are near to the point of exhaustion from quickstepping about the room.”
He gave a chuckle, taking a step backward, his gaze gliding over her from head to toe. “You appear to have held up beautifully.”
As they stood before one another, a hush blanketed the room. It was one tiny momnet, filled with a lifetime of anticipation. Coming to her senses, she caught Penelope’s attention and nodded toward the orchestra. Her friend rushed toward the musicians, nearly tripping on the hem of her dress. The lilting strains of Tchaikovsky soon swirled through the air like a welcoming breeze, and her guests issued playful hurrahs and hurried to find their partners.
Captain Garrison, male elegance infused with animal-like grace and strength, swept her into his arms—and into a dream come true.
When he solidly placed his hand at the small of her back, a tingling sensation shot straight up her spine to the roots of her hair. The resulting effect was more potent than wine. She was dizzy with desire, giddy with happiness. She must remember to breathe.
They stood so close, only their clothing and the heat of their bodies between them—a glorious temptation, just beyond reach. Teasing and taunting, it was a fleeting taste of what she yearned to partake of fully.
“I’ve thought a time or two about holding you in my arms,” he admitted, in a husky voice. “It feels even better than I imagined.”
“What other thoughts have crossed your mind?” she dared to ask, finding the courage to stare up at him.
His eyes crinkled at the corners, but his gaze held passion as well as mirth. “Things a man ought not discuss with a lady.”

Posted by GiniRifkin at 10:39 AM No comments: