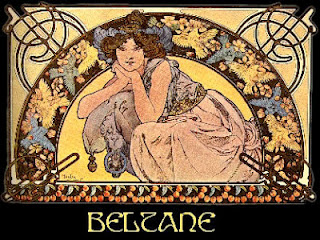 Beltane is a crossquarter Celtic holiday.

It is a day the bonfires burn bright, darkness is over shadowed by light, Vulcan rules and lights our way into the summer months to bring us the fragrance of the flowers now blooming.

It is customary to wash your face in the morning dew to enhance beauty both physical and spiritual. Also, regardless of size be it an apartment or the rolling hills of a cattle ranch, to walk the perimeter of your land giving thanks and asking that it be protected.       The morning dew washes away our cares of winter and gives life to the green man, Hern of the forest . Mother Earth now releases the tiny plants that are the bounty of our life and the hope of summer.

May is Mary’s month and she is honored as a true and miraculous mother. Her shrines and alters are bedecked with flowers.

The triple Goddess, Maiden, Mother, Crone is also honored. She who reminds us that all stages of life are holy and with purpose.

We also honor our earthly mother, and I am thankful that I was blessed to be raised by a woman of such goodness and love. Happy Mother's Day.

Some believe Beltane is the traditional marriage of the God and Goddess and is celebrated on May 1st. In ancient pagan times, this was the only marriage sanctioned during the month of May and only divine marriages, including those of kings, could be "sanctified" during May. Others had to wait until June, which is where the tradition of the June bride comes from. 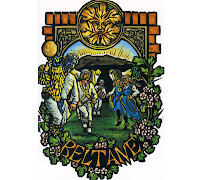 Beltane is the time of the ripening Earth and the appearance of the May flowers.


In many parts of and in parts of the as well, the Maypole is erected and danced around in a sunward (deosil) motion. (the pole was often recognized as a phallic symbol)

The Maypole is traditionally of Oak (a sacred tree of the Druids) and decorated with wreaths. The ribbons of the Maypole signify the softness of the Mother as the Maypole itself symbolizes the God.

The ribbons are of many colors and in some traditions each color has significance. When the dancers chose a ribbon it is not uncommon for them to announce, "I dance red, for romance." or "I dance green for good fortune." As the dancers weave and twine the ribbons around the Maypole a cone of power is raised and their wishes are bound tightly into that cone. 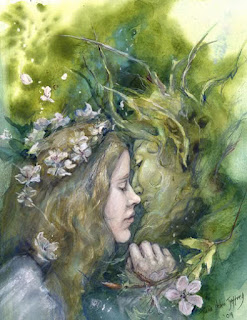 Traditionally, the last woman left holding a ribbon is crowned Queen of the May. There are a variety of methods of choosing the Oak King or King of the May. Often he is the man who is able to toss a wreath high enough and accurately enough to "ring" the Maypole. In other traditions he is the last man holding a ribbon after dancing the Maypole. Yet in other traditions the King is selected by the Queen to be her consort. 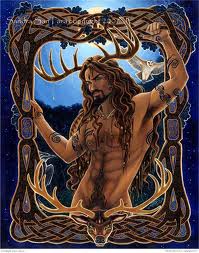 As fertility of the people, animals, and land was essential for
survival, many traditions were engendered in this holiday.

As with all children conceived at festivals, children who are born nine months after a Beltane festival are considered gifts of the Gods and are referred to as "Merry Be Gots."

In many parts of , the Maypole was believed to increase fertility of women and cattle. Infertile women would embrace oaks on May Day. Other cultures deemed rolling on the ground under an apple tree a fertility enhancer. A bough fastened to one's home was believed to help cattle produce more milk. 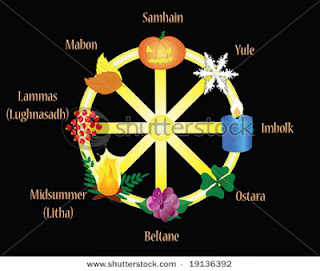 Beltane is also known as Cetsamhain and is directly opposite Samhain in terms of the wheel of the year.  And because Beltane means "good fire", bonfires were once used to mark the symbolic return of the sun and renewed life.

Great fires are lit, some folks leap the flames to show the exuberance of the season. It is believed that leaping the fire and declaring one's desire or intentions will help seal the outcome of what is wished for. 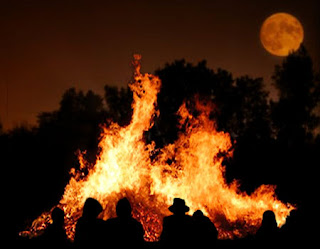 The fire itself was made of nine different kind of woods. The number nine is a sacred number, representing the triple Goddess three times over. The woods included birch for the Goddess, oak for the God, fir for birth, willow for death, rowan for magic, apple for love, grapevine for joy , hazel for wisdom, and hawthorn for purity.


In times long past the young people of the villages and towns would go into field and forest on May Eve to gather flowers. They would return to their villages the following day and gift each home with flowers. In turn they received the best food and drink each cotter had to offer. The revelers would bless the fields and flocks of those who were generous to them, in a similar manner to those well-gifted on Samhain (Halloween).

Customs associated with Beltane include skimming water from the top of a wealthy person's well in order to bring luck. The battle of the Oak King and Holly King occurs at this festival, with each fighting for the love of the Goddess. The Oak King wins and presides until Samhain when the Holly King wins as Lord of the waning year. 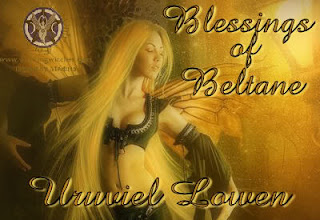 Wishing you a beautiful Spring seaon.......
Posted by GiniRifkin at 1:51 PM No comments: