Backing up the horse trailer 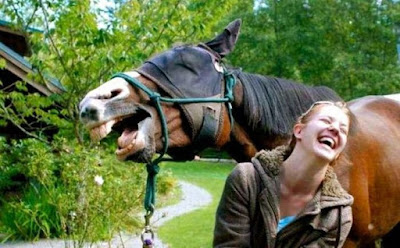 check it out here.......
horses laughing as man backs up horse trailer


Posted by GiniRifkin at 2:34 PM No comments:

Eye of the Pharaoh Cover Release and Give away!

Will an unexpected trip to 1920's Egypt be their downfall,
or will an ancient guardian keep them safe? 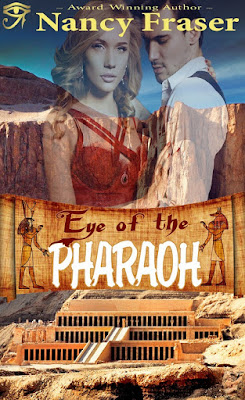 What a fantastic cover for a time travel paranormal

Publicist Teri Hunter has her hands full promoting Professor Joshua Cain and his new non-fiction book, The Pharaoh’s Mummy. She’s not convinced it’s even possible to turn this absent-minded, modern-day, Indiana Jones into a best-selling author.

Dr. Cain’s PhDs in archaeology and art history have prepared him for almost anything on the lecture circuit and among ancient ruins. He’s just not sure about a book tour...or the sexy publicist sent to monitor his every professional move.

When an odd request falls in their laps while in New Orleans, Josh and Teri find themselves transported to 1920’s Egypt where they must resolve an ancient curse in order to be sent home. Will the dangers facing them hinder their success and threaten their very lives? Or will help from an ancient guardian keep them on-track and safe?

Teri Hunter mouthed the motivational phrase she’d chosen for her personal mantra as she stepped across the threshold into the dark and musty storeroom.

A dim light shone from a glass-enclosed workroom in the far corner. Taking a tentative step forward, she faltered when the floorboards creaked beneath her feet. Something fast and furry brushed against her ankle. A shiver ran down her back, yet she fought the urge to retreat.

Do one thing every day that scares you.

This was obviously today’s obstacle. Were it not for her professional commitments and intricately organized schedule, she’d have no doubt bolted for the door and returned to the safety and illumination of the main building.

‘Sorry, but the storage area doesn’t have overhead lighting. Preservation of the antiquities. You understand.’ The dean’s words echoed in her head. To make matters worse, what little outside light there was had become nearly non-existent due to an impending thunderstorm.

Drawing a deep breath, she took a second step and then a third, winding her way past a half-dozen crates, some open, some not. To her left she heard a rustling of paper; to her right the distinct sound of footsteps.

Her apprehension grew, the hair on her forearms stood at attention. She’d barely made it halfway across the room before bumping into something large and solid. Reaching out, she laid her hand against the oversized object. Slowly, she raised her head and came face to face with the painted mask of an Egyptian noble. The chipped finish gave the death mask a deranged look.

You could win a $10 Gift Card or free book!
CLICK HERE TO ENTER

Fun Fact:  The idea for Eye of the Pharaoh came about following a trip to the Field Museum in Chicago. For the longest time afterward, I couldn’t get the images of ancient Egypt out of my head. Then, out of the blue, I received a gift from a relative who had passed...a gorgeous necklace fashioned like an Egyptian collar. The late relative had no way of knowing about my recent fascination with Egypt so I took it as a sign. There was obviously a story inside me begging to come out. 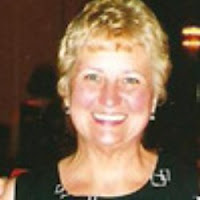 Like most authors, Nancy Fraser began writing at an early age, usually on the walls and with crayons or, heaven forbid, permanent markers. Her love of writing often made her the English teacher’s pet, which, of course, resulted in a whole lot of teasing. Still, it was worth it.
Published in multiple genres, Nancy currently writes for four publishers. She has published twenty-two books in both full-length and novella format. Nancy will release her 25th book in early 2017. She is currently working on her next Rock and Roll novella and two other equally exciting projects.

When not writing (which is almost never), Nancy dotes on her five wonderful grandchildren and looks forward to traveling and reading when time permits. Nancy lives in Atlantic Canada where she enjoys the relaxed pace and colorful people.

The Shoebill Crane, Cute or Creepy? 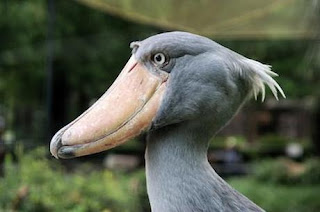 The Shoebill, also known as the Whale-head stork, was only classified in the 19th century when some skins were brought to Europe. It was not until years later that live specimens reached the scientific community. However, the bird was known to both ancient Egyptians and Arabs.

Although generally ranked with storks, the bird has recently been considered to be more closely related to pelicans and herons, as confirmed by DNA studies. 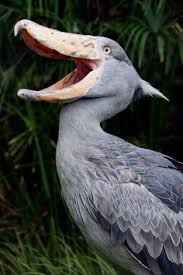 The Shoebill is normally silent, but they perform bill-clattering displays at the nest. When engaging in these displays, adult birds have also been noted to utter a cow-like moo as well as high-pitched whines. Both nestlings and adults engage in bill-clattering during the nesting season as a means of communication. When young are begging for food, they call out with a sound uncannily like human hiccups

According to Nicholas Lund...they hunt like total bosses of the swamp. The Shoebill will stand there, motionless as a statue, and wait for some poor lungfish or baby crocodile to swim by. Then the bird will pounce forward, all five feet of it, with its massive bill wide open, engulfing its target along with water, mud, vegetation, and probably any other hapless fish minding their own business. Clamping down on its prey, the bird will start to swing its massive head back and forth, tipping out whatever stuff it doesn’t want to eat.

Mr. Lund also States, the birds poop on their legs. Apparently this keeps them cool. Warm blood passing through the legs is used to evaporate the liquid waste, resulting in cooler blood circulating through the stork. The science is fascinating, but when you get right down to it, this already mean-looking bird with a huge, clattering death bill now also has poop legs. 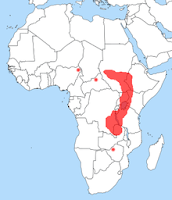 It lives in tropical east Africa in large swamps from Sudan to Zambia. 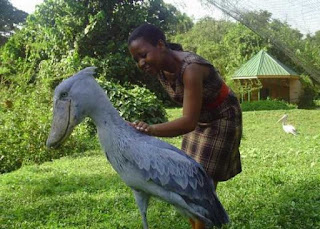 The Shoebill is a tall bird, with a typical height range of 43 to 55 inches, with some specimens reaching as much as 60 in, that's 5 feet tall! For their size, they surprisingly weigh only up to 15 lbs. The wings are broad, and up to nearly a yard wide, well-adapted to soaring. 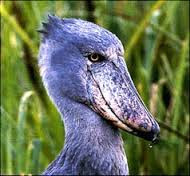 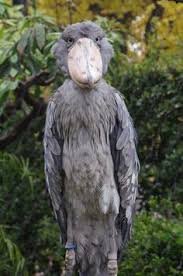 Cute or creepy, you decide.

Posted by GiniRifkin at 1:55 PM No comments: