The Veteran Exempts flag of 1812 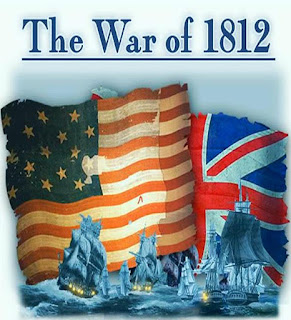 The Veteran Exempts, was a group made up of veterans of the American Revolution who were otherwise exempt from military service because of their age. By forming the Veteran Exempts they enabled the younger militia men to go off to war while the older men stayed to protect the local settlements.

Their impressive flag, started with the Don't tread on me wording, and the coiled snake with the Colonies represented by 13 stars, and 13 rattles in the snake's tail. But that wasn't enough for these guys. Thy will be done, was added giving it a religious overtone. And then wow, the skull and crossbones, very intimidating, and seemingly quite the opposite. 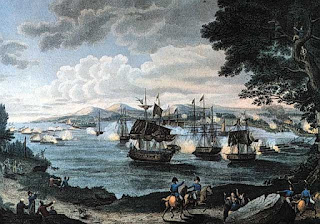 They participated in the Battle of Plattsburgh, on lake Champlain, in Sept. of 1814. It is reported Captain Melvin L. Woolsey received the flag of truce that the British sent on shore before the main landing.
Unfortunately, other activities are poorly noted, but it is most likely the Veteran Exempts turned out for other alarms. 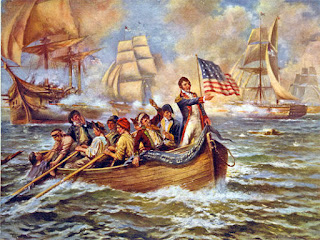 Posted by GiniRifkin at 9:12 AM