The Gadsden and Culpeper flags

As Sheldon Cooper would say, "Let's have fun with flags!" 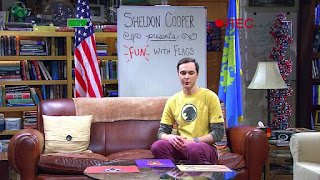 The rattlesnake was the favorite animal emblem of the Americans even before the Revolution. In 1751 Benjamin Franklin's Pennsylvania Gazette carried a bitter article protesting the British practice of sending convicts to America. The author suggested that the colonists return the favor by shipping a cargo of rattlesnakes to England, which could then be distributed in the noblemen's gardens.


The Gadsden Flag
In 1775, Colonel Christopher Gadsden was in Philadelphia 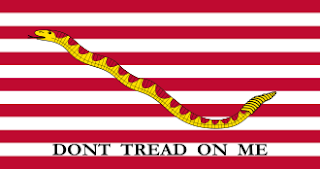 representing his home colony of South Carolina at the
Continental Congress, where he presented this new naval flag to the Congress. It became the first flag used by the sea-going soldiers who eventually would become the United States Marines.

This flag first saw combat under Commodore Hopkins, when Washington's Cruisers put to sea for the first time in February of 1776 to raid the Bahamas and capture stored British cannon and shot. It was raised by John Paul Jones.

United States' Bicentennial year, 1976, when all commissioned naval vessels were directed to fly it while moored or anchored for the entire year. In 1980, Secretary of the Navy directed that the warship or fleet auxiliary with the longest active status shall display the First Navy Jack until decommissioned or transferred to inactive service. Then the flag will be passed to the next ship in line (not including the USS Constitution.) 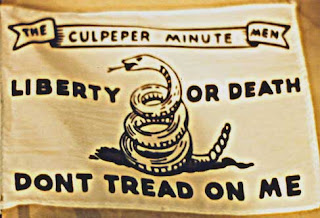 The Culpeper Minutemen (a militia group that formed around 1775 in the district near Culpeper, Virginia) were inspired by the Gadsden flag, but took it a step further. Their company flag portrayed the coiled snake with the famous “Don't Tread On Me” slogan, but the minutemen decided that was not enough. They raised another defiant fist in the air and added the message “Liberty or Death” to their flag. 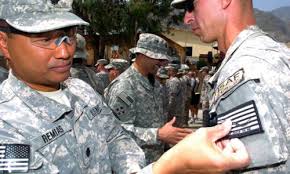 Recently the Gadsden and Culpeper flags have come under criticism by leftist groups who see it as a radical symbol or a threat, rather than a symbol of freedom. The Navy Seals still wear the patch proudly on their uniforms.

Posted by GiniRifkin at 9:30 AM