If you take Eureka Street west out of Central City,
in about a mile, you will come to at least four cemeteries--the Central City Cemetery, the Knights of Pythias, the Masonic, and the Catholic Cemeteries. 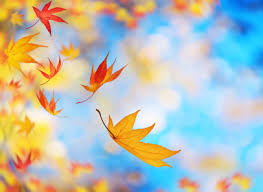 The sun is shining, and the trees are bursting with fall colors, all seems right with the world. Until you get there... 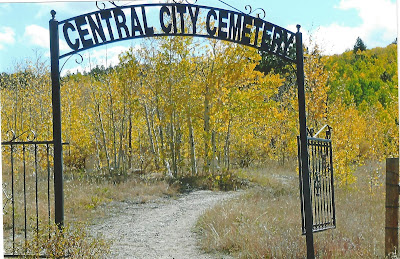 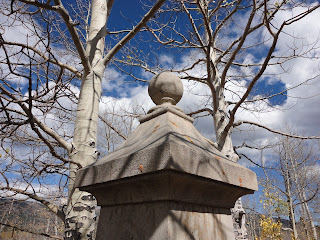 The sky grows dim, and the breeze grows cold. 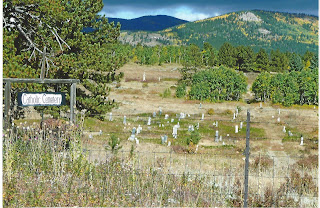 There are hundreds of ornate stone markers and intricate grill work, doting the landscape, with headstones dating back to the 1860s. 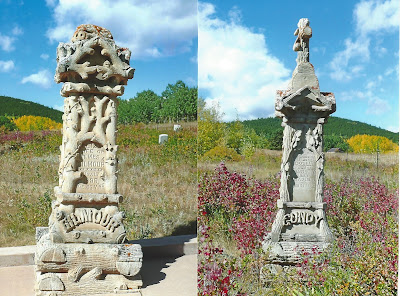 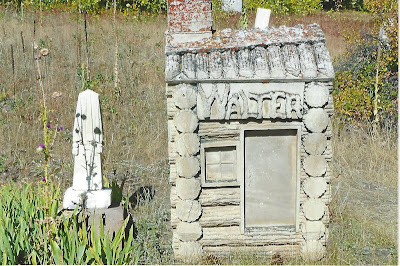 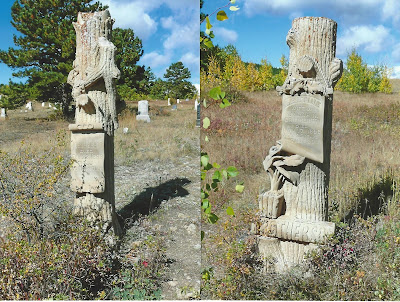 Sadly many are children's graves, and the inscriptions don't always list birth date, but record date of death and the number of years, months and days they lived. 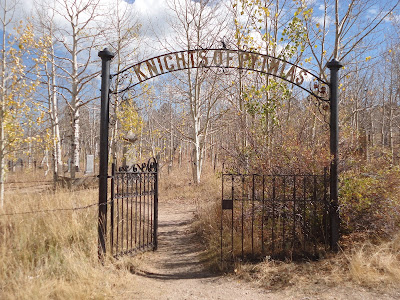 Passing through the
gates of the Knights of Pythias was like walking into a different realm. The terrain is wild and uneven, branches not caring that they block your path. Brambles and vines reaching for your ankles as you make your way along.

A little farther away is the Masonic Cemetery and the grave of John Cameron who died in 1887 at the age of 21. Information on who John was is rather vague. It is known that he was a local miner.

As the story goes, twice a year, a lady dressed in black Victorian regalia appears bringing flowers to the grave site. The date of her visits seems to vary, some say it is on April 15 and Halloween, other April 5th and November 1st. November 1st makes sense as this is the day John died. Several sightings have been reported, but when approached, the Lady In Black quickly disappears into the woods. 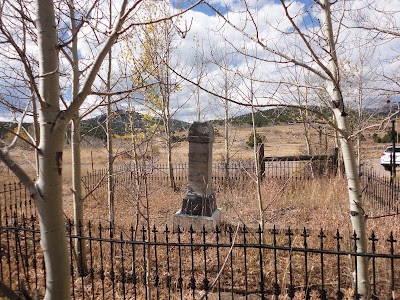 Supposedly, another of these old cemeteries holds the remains of a woman who was determined by her peers to be a witch. If you can find the grave, it is said when you stand a few yards away and watch, a green mist will surround the area. Further witnesses purport that if the lighting is right, hundreds of maggots can be seen covering the ground. 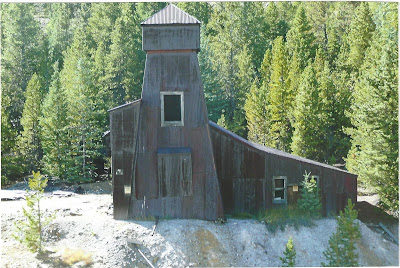 Several of the played out mines inspire tales of hauntings as well. Although the actual mine was closed over 85 years ago, rumor has it the Pozo shaft still remains home to a few ghostly miners.

Many a night-time skeptic has become a believer when they see faint yellow lights coming from the old mine and hear the sounds of men working deep down in the abandoned shaft. (photo is not the Pozo shaft)

I didn't see any ghosts, but there was definitely an eerie aura about the area, and that was in the light of day!

Wherever you are on October 31st, wishing you a
HAPPY HAUNTED HALLOWEEN.

photo's by Steve Brown and Gini.

Posted by GiniRifkin at 7:39 AM