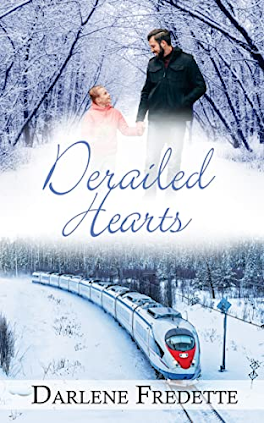 Available here
I don’t often read contemporary romance, but when I do, I always know a story by Darlene Fredette will be well written, carefully plotted, and heartwarming.
Although each story in the Redford Falls series stands along, Derailed Hearts offers just enough back story to set the scene for new readers while bringing a smile of reminiscence to fans of the series. (The interaction between the residence has been fun to follow).
After Ethan Marley’s wife dies in a car accident, his life becomes focused on Avery, his sweet little daughter who was also in the accident and now finds verbal communication a challenge.
While on a train ride winding through the gorgeous Canada territory, Ethan and Avery meet a young woman, Jenn, who is a fashion designer. Ethan and Jenn feel an unexpected connection which neither was seeking or wants.
Having also suffered a major car accident, Jenn can empathize with the fear, anger, and nightmares Avery has been experiencing. Jenn, has issues of her own as she battles to regain strength in her injured hand which is inhibiting her designing abilities.
While traveling, Ethan and Jenn are thrown together by mishap and an act of kindness. Sharing a small compartment leads to innocent romantic interaction, but the attraction between them grows stronger as the train speeds ever onward. When they reach their destination, will it be an ending or a new beginning?
Although not a lengthy read, Darlene was able to fully develop these three very likable characters along with the setting which is different and interesting as most of the story takes place on the train. There are also surprises instore as you cheer for all three to reach that happy ending.
Looking forward to the next Redford Falls book, and hoping Max will have his own story soon. Love me a cowboy!
Available here
Blurb:
Single father and ER doctor, Ethan Marley, is ready to put down roots. He and his daughter embark on a train adventure across Canada from west to east coast. Boarding the train, he meets a woman who steals his breath, and he learns that she too is headed to Redford Falls. He is intent on maintaining a friendship only, but Jenn makes his heart race faster than the train.
Fashion designer, Jenn Martini, travels by train to Redford Falls to visit her father. Her plan for a solitude escape derails after meeting Ethan and his daughter. Sharing a confined-spaced cabin sparks an immediate attraction, and by the end of the trip, she longs to be a part of their family. Only as she opens her heart to love, do the scars from her past begin to heal.
With more in common than relatives in Redford Falls, is their love strong enough to overcome the truth behind the accident…and save their future?
Derailed Hearts by Darlene Fredette
Available here
http://findingthewritewords.blogspot.com/
https://www.amazon.com/Darlene-Fredette/e/B005NAF660/ref=dp_byline_cont_pop_ebooks_1
http://darlenefredette.blogspot.com/
#contemporaryromance #singlefatherromance #TheWildRosePress