THANK YOU to N.N. Light for selecting
Fatal Recall as best Romantic Thriller of 2021 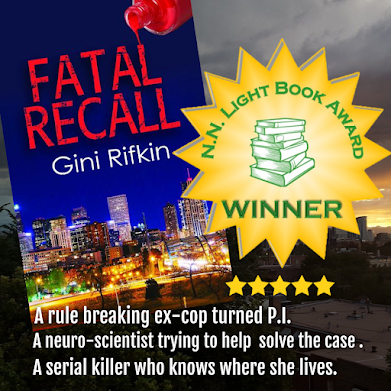 Hudson Kincaid prefers the wide-open spaces. But tracking down a serial killer means hanging out in Denver as he investigates neuroscientist Dr. Marilyn Monrose. So far, he can’t figure out if she’s city kitty in high heels, or a country kitten in cowgirl boots?
Marilyn’s experiments using ramped up virtual reality, captures the final moments of each murder victim’s life, a chilling discovery she’s trying to keep secret. The last thing she needs is a determined private detective barging into her lab—no matter how sexy he looks in his Stetson hat.
When word of her research is leaked to the press, Marilyn becomes the killer’s next target.
Now the woman Hudson races to save, is the one who has stolen his heart.
Available here e-book and Paperback
Hud stepped across the threshold and into Marilyn’s lab. She waited for the security door to close and lock before she spoke.
“Let me remind you, PI Kincaid, all information you learn here is classified. In fact, I found out yesterday the Government has shown a passing interest in my work.”
“Our government?”
“Yes, of course.”
“Why?”
“I’m not aware of the specifics. But every application I can come up with sounds like Black Ops, or Army Intelligence, or something equally scary.”
“That sounds ominous. Maybe you’d better explain to me exactly what you’re doing?”
“If I take you into my confidence, you have to promise you won’t tell anyone. If they find out I leaked even one iota of this information, I will disappear. And you might too.”
“What do you mean by disappear?”
“I’ll be transferred to a lab Heaven-knows-where to continue the work until it’s completed, or my contract is up. Hard telling what will happen to you.”
This gave him pause. She sounded serious. But how could he rationalize being in possession of crucial information without sharing the data with the DPD—or at least with Marco?
“Promise me.”
She was taking a leap of faith in trusting him, and the soulful pleading in her eyes made him want to comply. In fact, he wanted to promise her more than to keep his mouth shut. He wanted to promise her sunsets on the front porch and breakfast on the veranda.
Available here e-book and Paperback