5 STARS from LASR for Undercover Outlaw

Thank you Long and Short Reviews
for the great 5 star review.
And nominating Undercover Outlaw
as a finalist for Book of the Month. 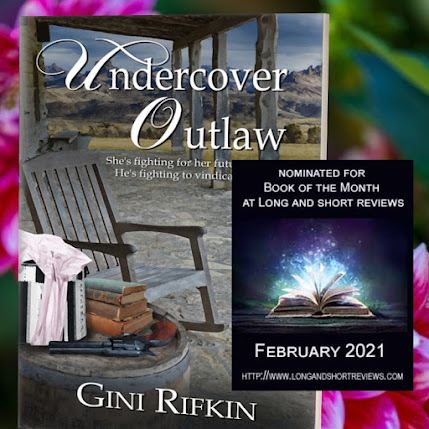 Blurb:
Impersonating an outlaw, Jesse's determined not to let the past or his brother’s death be forgotten. His request for justice is a living, breathing, part of his soul.
Trinity is heading to Denver, to escape from a vicious guardian. When her stagecoach is robbed, and Jesse, an outlaw kidnaps her, all her well-laid plans are nothing but dirt under her feet.
Trapped in Prairie Ridge by a flood, Jesse and Trinity’s feelings soon run as high and wild as the river.  When Jesse is accused of murder, Trinity stands by his side, and they take on the town’s tyrant. But even with help from an unexpected source, fighting for justice could get them nothing but a toe-tag and a pauper’s grave.
Amazon

Review from Long and Short Review
Undercover Outlaw is a quality written piece of literature that walks the fine line between a quest for justice and a thirst for revenge. I teetered between the two as the story took me on a journey mixed with romance and danger.
The leading characters, Trinity and Jesse immediately brought the book to life on page one. It was impossible to put the book down. I couldn’t turn the pages fast enough to see what happened next. I felt the instant connection between the two. In fact all the characters were well developed. It was easy to hate the town’s tyrannical leader. Hard not to love the townsfolk in Prairie Ridge.
The romance between Trinity and Jesse was more sweet than sensual but regardless they were definitely entertaining. I laughed when I read the word “dimwit. I haven’t heard that word in ages. My mother used to use that word.
Undercover Outlaw was a fast paced, plot twisting, emotional provoking story that pleased me greatly. I especially enjoyed the epilogue. I applaud Gini Rifkin for such a wonderful read.
Amazon

Posted by GiniRifkin at 8:51 AM