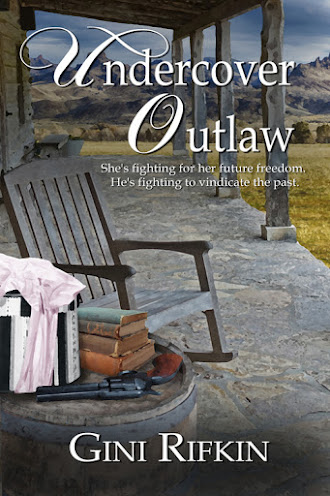 A man consumed by the need for revenge.
A woman willing to sacrifice all for her freedom.
Jesse is determined to track down the man who killed his brother in cold blood. Impersonating an outlaw, his quest for justice becomes a living, breathing, part of his soul.
Trinity is heading to Denver to escape her vicious guardians. When her stagecoach is robbed, Jesse kidnaps her, and all her well-laid plans collide with his, leaving them both in danger.
Trapped in Prairie Ridge by a flood, Jesse and Trinity's feelings soon run as high and wild as the river. When Jesse is accused of murder, Trinity stands by his side, and they take on the town's tyrannical leader. As the city cowers in fear, help comes from an unexpected source, but can it save Jesse from a hangman's noose?

5 STARS from Still Moments Magazine
Read review
5 STARS from N.N. Light
Read review
5 STARS from Readers' Favorite
Read review
Grab your copy here....
Amazon
Barnes and Noble paperback
Nook
Excerpt:
“That day by the stream, when you called me a liar, you were right. I liked the way you made me feel—and I want more.”
The moonlight broke through the clouds and streamed through the bedroom window, etching her in a pale glow, reminding him of the innocence that lay beneath the brave words. An odd sense of responsibility, or something, had him hesitating as if he were leading her astray.
“Jesse, fate has delivered me to your bed not once, but twice. I don’t have the strength nor the desire to resist you a second time.”
She blinked her eyes and stifled a little yawn. Was she even fully awake?
Nope. This wasn’t gonna happen. He had no intentions of wooing a virgin, or dealing with the resulting emotional aftereffects. So he’d better get out of here, because only a saint or a dead man could keep resisting such guileless seduction.
“I always believed the third time’s a charm.” He gathered what he’d come in with and headed out the bedroom door. “Don’t follow me.”
Amazon
Barnes and Noble paperback
Nook
BookBub follow me
Facebook
GoodReads
-------------------------------------------------------------------------------
Gini Rifkin’s books follow characters who are courageous and passionate about life, and when they meet, sparks fly while danger often threatens. Her settings include the American West, Medieval and Victorian England, and Contemporary fantasy. When not writing, Gini has the privilege of caring for her menagerie of rescue animals including ducks, geese, goats, rabbits, donkeys, and cats. Her writing keeps her hungry to learn new things, and she considers family and friends her most treasured of gifts. So step back in time or into the future, where adventurous romance is waiting just for you.
#westernromance #historicalromance #Feistyheroine #adventurousromance #UndercoverOutlaw #soileddovewithheartofgold #sweetlysensuous #FiveStarHistoricalWestern