I have a penchant for odd animals. My five favorites are capybaras, manatees, tapirs, Tasmanian tigers, and Okapis. 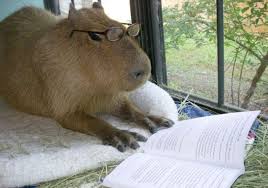 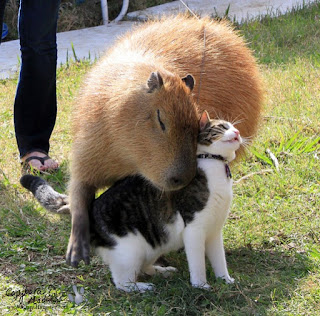 Classifying them as large, semi-aquatic rodents found inhabiting the water-logged regions of Central and South America is somewhat off putting, until you see them.


They are so adorable. 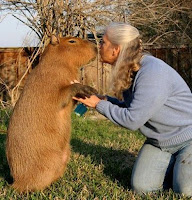 The common name of the Capybara is thought to mean "Master of the Grasses", while it's scientific name comes from the Greek word for water hog. 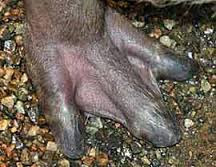 They have hoof-like claws on their toes which along with the webbing, helps them both when negotiating the slippery banks and with swimming, It also prevents the Capybara from sinking too deeply into the surrounding mud. 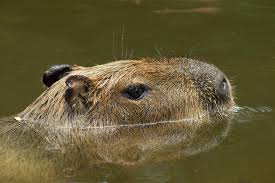 One of the Capybara's most distinctive features is the fact that their eyes, ears and nostrils are all positioned on top of it's head meaning that they still have excellent sight, sound and smell while in the water. The placement of these features also means when threatened, the Capybara can retreat into the water leaving only these parts of it's body exposed to potential predators. 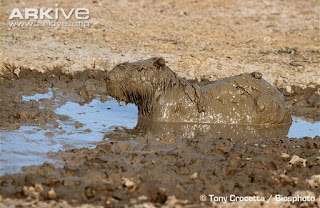 The Capybara sleeps very little, preferring instead to doze and rest during the morning in thickets on the banks, or wallowing in the mud and water when cooling down in the heat of the midday sun. 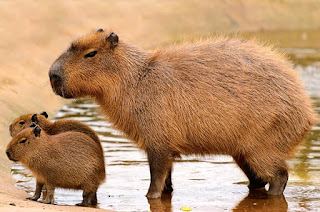 They begin to emerge onto land in the early evening to graze on grasses and aquatic plants, and they will continue to do throughout most of the night. 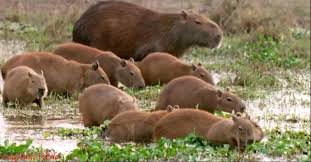 They travel in herds of anywhere of 10 to 30, and are even seen in groups of 100. Litters, between 1 and 8 pups, are birthed on land, and the young are very well developed. They not only have all their fur and can see, but are also able to run, swim and dive within hours of birth. 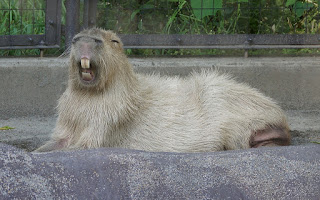 Like all other species of rodent, their two front teeth grow continuously throughout their life meaning that they must gnaw and chew their food to grind them down which they do in a back and forth motion rather than from side to side. 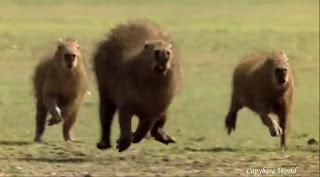 Although most at home in the water,
their top speed on land is around 22 MPH 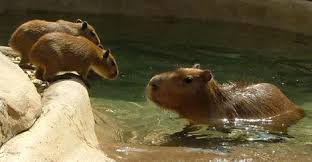 The Capybara can live up to 10 years in the wild and slightly longer in captivity. But having them as a pet can be quite involved and is not recommended. They love to chew up your house and a pool is also necessary to properly care for them. Their predators include large cats, eagles, snakes, hunters and loss of habitat. For this reason they rarely stray too far from the safety of fresh water. When threatened they can stay submerged for up to 5 minutes. 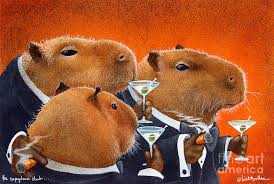 So here's to capybaras,
long may they live and not become endangered.