CHAMBER POTS: A peek behind the bathroom door. 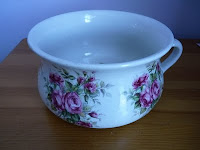 Ahh the good old days,
well maybe if you were part of the upper class.

As romantic as the Victorian era may sound, I have a feeling it was pretty rough in the trenches….especially the trenches running through town filled with the byproducts of the Industrial Revolution.

By the mid-1800s, the consequence of 3 million people crowded into was flowering, mixing, and foaming merrily along. All sewers led to the , pouring through bulkheads along the shores. (I always thought punting on the sounded so nice, probably not.)

The abominable odors of the Fleet river, complained the monks of the White Friars, "have overcome the frankincense burnt at the altar". They claimed the fumes caused the deaths of several brethren. And for a number of sultry days in 1859, the seethed, seeped, and nearly boiled under the burning sun of an unusually hot season. Parliament was suspended as window blinds saturated with lime chloride and other disinfectants failed to subdue the odor and revulsion. It was so revolting that one foreign newspaper bannered twin headlines to catch the calamities of the day: " Is In Revolt, and The Stinks." 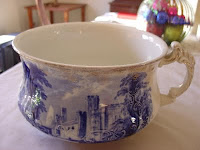 The cess-pit which existed in for many centuries, from medieval times onwards was a chamber in which sewage from each individual house was 'stored' until it was emptied. This dubious task was assigned to the 'night-soil men'. And nothing was sacred not even privy privacy. Saltpetre men extracted nitrates from excrement, so it could be used to make gunpowder. Saltpetre men also had a license from the king to enter into anyone's house at any time and remove the sewage-ridden earth from the cess-pit.

By 1858, George Jennings had popularized public lavatories. He first introduced the novelties by installing them in the for the Great Exhibition of 1851; over 827,000 people paid to use the "necessary convenience." 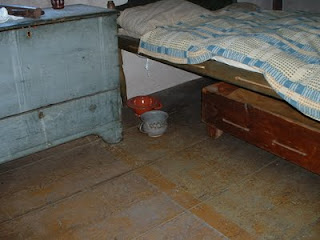 Still the chamber pot, our topic of today, remained in demand for many years due to the fact that converting one’s home was expensive and on occasion not logistically sound. Chamber pots are known by a variety of names including: • •Pot •Pot de chambre •John • •Potty •Thunder pot •Thunder mug •Bourdalous 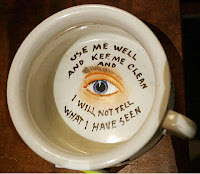 The chamber pots of the working class were usually made of copper, although later ones might be of crockery. The chamber pots for the rich and royalty were solid silver, the kings' very ornate and pretentious. James I had a portable "potty," which he used for traveling. During the 1500s, poor families would urinate in a pot and at the end of the day this urine would be sold at the local tannery to tan animal hides. Some families were so poor they "didn't have a pot to piss in" thus the term. 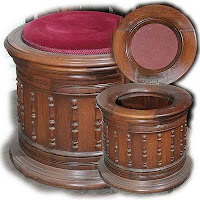 Going even further back in history, injuries caused by the far-flung contents of the chamber pots, or "missiles of mirth" as one ancient Greek dramatist called them, persisted through the ages. Early Roman law included the Dejecti Effusive Act, which fined a person who threw or poured anything out of an open window and hit someone. The law awarded damages to the injured party. Strangely, the statute applied only during daytime hours. King Richard II followed suit with his writ of Statuto quo nut ject dung "A writ that no one is to dump dung."

Proper manners would prescribe warning unwary pedestrians that a shower was on its way. Thus the cry of "Garden l'eau" (pronounced Gardy-loo, and meaning "Watch out for the water!") would echo up and down the streets. Over time it evolved into English slang for the toilet or loo.

If you were a family of means, you had a chamber maid to empty the chamber pot. With some variation, the hierarchy of maids in large households ran thusly. Housekeeper, Lady’s Maid, House Maids divided into Parlour Maid, Chamber Maid, Laundry Maid, and servants.

The Chamber Maid was responsible for taking care of the 'chambers' in the home. Normally this meant the bedrooms and dressing rooms. They would make the beds, dust, clean up the clothes and floors. They would also take care of the 'facilities' such as chamber pots or bathrooms. 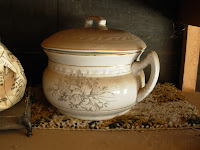 Anyway, the next time you use your lovely nice smelling facility gleaming with porcelain, chrome, and travertine tile, do offer a moment of gratitude for the advancements we’ve made.

For which modern day convenience or invention are you most thankful?